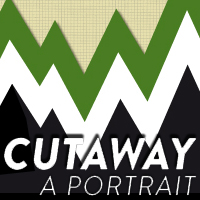 Entering the Waterside Workers Hall in Nile Street Port Adelaide is an intriguing experience. A dimly lit entrance space; a sold out sign; an equally dimly lit but warm main foyer space within the hall; and a vast black curtained square from ceiling to floor; signal that this will be no ordinary production. Cutaway – A Portrait is a complex four part exploration of the spirit of Port Adelaide epitomised by this hall that must have heard many lively conversations over many a glass of beer.

The production begins in the main foyer space with the audience standing around or sitting on the floor as they listen in semi darkness to the evocative song ‘In A Different Light’ written and sung live by Luke Ashby. The section continues with Jason Sweeney manipulating two large torches so that their light beams move slowly around the walls of the hall; this is accompanied by a subtle soundscape that is almost reverential. It was a long time to stand for some of the older members of the audience but also a unique experience to be part of. The mood changes and the audience are on the move into the vast black square of material for the second section of the production ‘Portrait’.

The detailed program notes by Roslyn Oades, the Creator and Director of this section, state that the actors are following pre-recorded text via headphones. This is not a text learnt script, neither is it improvised, but a rigorous process of speaking the dialogue as it is coming through the headphones; a remarkable achievement by the three actors, Katia Molino, Sasha Zahra, and Stephen Sheehan. This technique gives a verity and spontaneity to the dialogue, a freshness that is inbuilt into each night’s performance for this short season.

Oades has knitted together short slices of Port Adelaide’s living culture through a multitude of interviews by ordinary people and well-known local identities each who provide part of the spirit that was, and still is, the Port. This is only part of the production’s unique charisma. Oades has then, through the skill of three fine performers, transferred the edited interviews into a show that never lags and never feels like a performance. I had the sensation that I was a silent partner sitting at the table, or in the lounge room, or in the hair saloon, ready to join the conversation at any time . . . as I’m sure many of the audience, by their laughter, sounds of approval, and small interjections, also experienced.

The Set Designer, Wendy Todd, has captured the fast dynamics of the concept by her (at the beginning) jumble of furniture. A standard lamp, chairs, a mattress, a table, and other stuff, which end up creating, by the almost invisible actions of the performers, the main location requirements of the dialogue. A small tour de force in its own right.

Only when I fully absorbed the detail of the presentation program after the show, did I fully understand the complexity of the undertaking by the three accomplished actors.

Sasha Zahra with her warm, friendly, immediately likeable approach to her characterisations enlightens with a range of accents. She crosses the gender barrier effortlessly. Katia Molino brings both older and younger qualities to her characterisations and totally captures the essences of her gender crossing range of local characters. The always watchable agile Stephen Sheehan is fast, absolutely in the moment, and totally at home in the acting space.

And what are they talking about?

The Port, of course… football, the Magpies, hairdressing, Commercial Road, Lipson Street, the good times, the bad times, the ordinary times and the Failie, that brave little ketch that in many ways represented the beating heart of the Port. Spirited conversations drawn from the words of more than fifty interviews.

The Anchor Song, a hauntingly beautiful song of the sea by Icelandic singer Bjork, echoes around the hall at the end of the performance. Sung by the Born On Monday Choir it brings to life in the unique local setting.

Vitalstatistix continues to serve the Port well in this four section production. Four sections, I hear you ask? As we left, each member of the audience was handed an envelope with a ‘One Person Talks Then Another Person Talks’ postcard and explanation screed devised and produced by the artist Sasha Grbich.