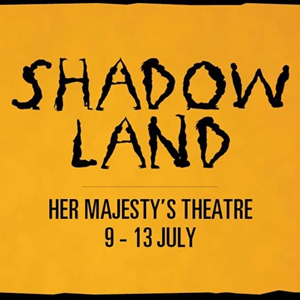 Sitting in row E, waiting for the sold-out theatre to fill and for the show to commence, I begin wondering whether the ‘Shadow Land’ hype was just publicity spin. A bare stage, two dresses and a pair of trousers, jacket and cap hang on wires, left, right and centre stage; innumerable small props hang neatly around the sides of the stage; a small shadow screen sits upstage. That is it as far as I can see. An ethereal sound track is coming out of the loud speakers.

Then, the house lights dim. A young performer in bra and panties enters, walks up to the plain white dress hanging centre stage; and touches it. Whammo! A shattering clap of thunder and explosion of white light (I swear the whole audience was startled). It is on for young and old and we are enthralled by the sheer pace, physical virtuosity and morphing between realities over the next ninety minutes until the final curtain call and house lights up.

From the glossy well produced program: “Night. A small house on a small street. A teenage girl prepares for bed. She longs for independence, but to her parents she is still a little girl. With nowhere for her thoughts to go but into her dreams, she falls asleep only to wake to something lurking behind her bedroom wall — her shadow. The wall of her room suddenly starts to spin, trapping her on the other side. Unable to escape, the girl sets off on a journey of discovery, going deeper and deeper into Shadow Land, looking for a way out.”

The audience is skilfully propelled into a behind the looking glass dream world where everything is possible. The performances contain elements of gymnastics, modern dance and circus and the moment to moment character and shadow manipulation of the young male and female dancer’s lies at the core of the theatrical experience. They manipulate the props, their own bodies, and the young girl through her dream world of discovery as, in her dream, she turns into dog girl; meets good and bad men and women; and falls in love with a centaur, all before waking in the morning and realising that she is becoming a young woman.

The speed of change between realities is unbelievable. At one moment the ensemble is dancing on an empty stage, and what strong and lithe bodies these fit young men and women have. Suddenly a huge suspended shadow projection screen is lowered and this reality changes to shadow land/ dream reality. All props, lights, screens, and shadow images are manipulated by the onstage performers.

And the shadow images? From the smallest leaf, crab, or rock to an elephant and the arm of God - mostly constructed fluidly by the performer’s bodies as they are morphed into whatever... seamlessly presenting image after image. The soundscape composed by David Poe, is loud but never oppressive. From house lights down to house lights up it ranges through ballads, country and western, gentle folk music, raunchy hard driving rock and rich abstract sounds that fill Her Majesty’s auditorium to the back wall.

Pilobolus, an American dance company formed by a group of Dartmouth College students (New Hampshire) in 1971 with a manifesto to develop collaborative projects to break down the barriers between production disciplines, has toured around the world with its productions. ‘Shadow Land’ is at the end of its current Australian and New Zealand tour.

This is an amazingly joyous piece of serious and provocative physical theatre that never flags in energy. There are unexpected moments that catch the audience unawares. The final picking out of Adelaide in ‘Shadow Land’ body shapes accompanied by Men at Workʼs classic anthem, ‘Land Down Under’ brings the house down.

Read the hype. See the show. It will change your perception of what can be done, live, on stage in front of you... bodies, silhouettes, soundscape. A truly elevating theatrical experience.

When: 9 to 13 July
Where: Her Majesty’s Theatre
Bookings: bass.net.au