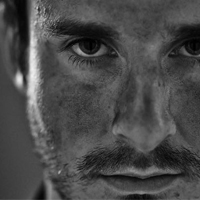 Friendly front of house, warm and congenial bar area, soft music and a delightful old world auditorium with comfortable seating - was I really about to watch a youth theatre production of Macbeth?

Youth theatre is the key element of this challenging production presented by one of Australia’s forefront youth theatres, Urban Myth. My review has been written with this in mind. As the Artistic Director of Urban Myth, Glenn Hayden told me before the show: “We are looking to give our young people a diversity of theatre experiences to prepare them for the real thing”. The Senior Ensemble has been tested fully with this production.

The stage is open, bare boards surrounded by massive corrugated iron battlement towers. Their bases are daubed with rusty red paint. ‘The play’s the thing’ and the set design and largely monochromatic costumes by Kerry Reid both hold fast to this truth.

The moment the three witches stride on stage and loudly proclaim: “When shall we three meet again?” you know that you are watching a strong youth theatre ensemble at work. Without an interval, the production moves through just under two hours of Shakespeare’s intense story of scheming, murder, prophesy, and revenge. At times the young actors lack the benefit of physical and emotional maturity in interpreting their parts, but this is more than made up for by the cohesive performances of the nine actors and the sincere intensity of their work.

Director Nick Garsden has edited down the original (for sake of througline plot clarity), guided the cast through the intricacy of Shakespeare’s convoluted text, and blocked the stage action with simple dynamics that support the flow of the action rather than confuse it. An intelligent use of exits and entrances has dissipated the problems of staging this long and multi-location play, allowing the audience to remain focused on the telling of the tale.

Augmenting the set is the restrained use of lighting (designed by Toby Peart), sound (designed by Al Thumm) and other special effects, none of which dumb down the emotional impact of the play.

When the actors took their bows at the end of the production, I counted nine and had to shake off some disbelief that there were not more. Between them they played all major and minor roles with an evenness that could have as easily been lost on a larger ensemble.

Edwin Kemp-Attrill as Macbeth carries the bulk of the dialogue. He’s a surprising choice. Not a physically big actor, but a powerful presence and able to portray a weak but conniving man who is finally undone by his ego and passion for power. Kemp-Attrill’s practical theatre experience must have been a huge asset to lead the ensemble through this production.

Alex Petrova as Lady Macbeth is passionate, insightful, and very focused in the role; A most enjoyable (if this is the right word to use in the context of this dark energy force) performance that never falters.

Nic Cutts as Duncan and Macduff, Josh Mensch as Banquo, and Stratos Boutsis as Malcolm are equally strong in their supporting roles. But this would have been a lesser production without Hannah Fallowfield, Julia Sciacca, Emma Kew and Lucca Boyce playing a further twenty characters between them.

Outstanding scenes included all the witches scenes; Duncan’s murder; the porter’s scene (excellent visual comedy by Lucca Boyce); the murder of Lady Macduff and her son (chilling and memorable staging); and Lady Macbeth’s loss of sanity within the: “Out damn spot!” scene.

Macbeth is a daunting play for even the most experienced ensemble to undertake. There were some shaky moments on opening night but no matter. The experience for these nine young actors will be invaluable, and in the end the audience is given a crisp new interpretation of this dark journey of a man and his lady caught up in their treacherous grasp for power.

When: 7 to 17 Aug
Where: Goodwood Institute
Bookings: trybooking.com