Dream of The Ghost Story 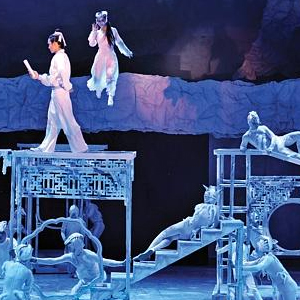 If watching a couple of hours of intense acrobatic work; having your ears assaulted by loud drumming; and following a sometimes obscure Chinese folk tale about a man in love with a fox spirit is not your thing, then you were not one of the near capacity audience that was part of this magical experience at South Australia’s largest proscenium arch theatre on Saturday night.

This spectacular production by the Shandong Acrobatic Troupe from China is full of amazing moments that worked on many levels, some subtle, some exploding across the stage and greeted by a never ending series of ‘ohs’ and ‘ahs’ and applause by the appreciative audience.

The production, in two sections, follows the story of a young man who becomes entangled in a spirit world of ghosts, foxes, immortals and demons. What develops is an epic battle between good and evil. All ends well in the end.

But it’s how the story unfolds that is the real success of this production. The story, itself is only the vehicle for an evening of world class acrobatics by a fifty strong team of very young and older acrobats. By the end of the performance there were few acrobatic elements that hadn’t been showcased: high wire trapeze work; barrel and drum rolling; metal plate twirling; and leaps through hoops that had to be seen to be believed. Even bungy jumping gets a nod. There were no safety nets, just remarkable skill and utmost ensemble co-operation.

And then the acrobatic flying! Breathtaking. Elegant. Sensuous.

As the company’s name implies, acrobatics lies at the centre of this vast production.

Another key element was the sound track. Loud. Very loud. Continuous. Starting with a single booming bell and going through the full gamut of drumming; classical Chinese rhythm; and contemporary Western beats; at times, all melding simultaneously.

A third element was the spectacular light show consisting of pure white bands of light; sudden plunges of the stage picture into blue, purple and red. At times abstract images were played across the entire stage or in one instance, a blurry back projection of figures in a meadow that echoed what was happening on stage.

The costumes, from the white furry outfits of various spirits, the metallic costumes of the demons, to the glittering multi coloured costumes of the finale were everything we, in the West, have come to imagine as ‘Chinese’ theatrical.

The set - the facade of a huge temple surrounded by frames at the edge of the wide Festival Theatre stage; intricate carved pagoda rooms glided on stage as platforms to be danced on.

The storyline moves from dream to nightmare in the second part and some awesome theatrical effects. Smoke. Wind. Snow. Dancing skeletons with fluorescent bones. A huge tree like structure emerges from the temple and at the end of the scene simply folds up and is gone.

The theatrical whole seemed effortlessly contrived to deliver a simple story about a man falling in love with a spirit being. One of those productions that you exit wondering if it had only been ten minutes since lights up and not a two hour full on production.

This was no regimented heavy handed choreographed affair. The enjoyment of the performers was evident right through to the final audience applause. One of the most spectacular nights of entertainment this reviewer has experienced at the Adelaide Festival Centre Theatre.