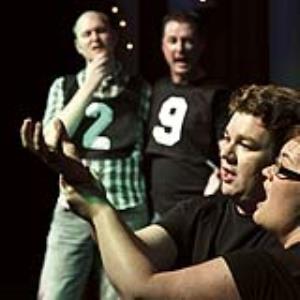 Nexus Cabaret Adelaide, a suave cabaret setting with a bar to keep things moving, jazz beats coming through the speakers, and a row of grey plastic chairs in a line across the stage, ready for the improv participants. The prize? A gold star trophy (not real gold), sitting unpretentiously on yet another grey plastic chair at the side of the stage.

The lights dim and the quixotic but immensely practical Eugene Suleau enters as compere/ scorekeeper. It’s on for young and old. A PG rated performance without boundaries for the next 90 minutes. Thirteen competitors, twelve of whom will be eliminated, and one awarded the title of 2015 Australian Maestro Impro Champion.

Suleau runs a tight ship and with directors Patti Stiles and Esther Longhurst sets sail for a fine afternoon of in the moment entertainment as the improve performers strut their stuff. The audiences provide sound effects, key words and emotions, and applause (on a scale of 1 to 5) that determine the scores and thus the process of elimination.

Stiles and Longhurst provide the scene elements and in some cases worked through the detailed impro directions that the performers must interpret singly or in groups.

The hardest round is the first one, where the thirteen competitors come fresh to the challenge. Gradually the tension eases as a strange bond develops between everyone on stage. If you are playing a tree in one sketch and then the main role in another, you really need to get on well with each and every performer, even though they, in the end, are your competition. This is the fun side for performers and audience alike. This is a real competition but done with such good will and in-the-moment performance expertise that its almost like losing a member of the family each time there is an elimination.

The thirteen improvisers come from across Australia: the ACT, NSW, QLD, SA, VIC and WA.

There is a lot more to this show than first meets the eye. There is a very subtle interaction between the performers. The lights and sound are manipulated via hand gestures from the two directors, and at the side of the stage, live music by David Wells on keyboard or guitar.

One small glitch came early in the competition when the musical soundscape seemed a tad loud to one of the directors who called for a softer approach. Instantly, Wells was on it. This aspect of many ears and eyes being in the moment was the making of this quirky show. But that’s what improvisation is all about. Being in the moment... on the fly... and this includes the audience.

After Interval the eliminations came thick and fast until only Rik Brown (ACT) and Tom Dunstan (QLD) were still standing. During a breath taking sequence of who could swipe the others’ hat first fast vocal and physically agile slight of hands improvs, Tom Dunstan became outright winner, and this year’s National Maestro Impro Champion. A tenacious, dogged, but very, very funny performer who well deserved the gold star. At the end of the show, a comment from the youngest member of the audience said it all: “I liked the music and loud fun”. Astute praise from this three year old summed it up for all of us.