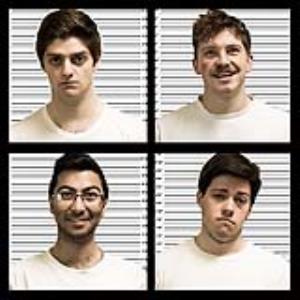 What could possibly go right for a production featuring seven singing inmates in a maximum security prison and their desire to win a talent contest during which one gets murdered and one gets stabbed in the chest?

This is one of those Fringe shows that slips in almost unannounced, fires up, does its thing, and exits stage right without fanfare but having left its audiences (four out of five full houses) spellbound.

The story revolves around four inmates coming together as an acapella quartet (one is possibly a terrorist, one is high on drugs, one is new to the prison system and one is in for hacking into defence department computers). Their competition? A sad faced ukulele player. A shoe in you would think. But waiting in the wings is a 6 foot 7 inch tattooed thug and his dark eyed bearded side kick who have a trick or two up their sleeves.

All comes good in the end, though not for the contestant who gets killed, or the one who gets stabbed in the chest, or for that matter the Singing Inmates quartet. They lose the contest to the wicked duo that have transformed into the almost loveable lycra clad balletic gymnasts, Snake Eyes and Jimmy Sticks, who go on to better things... we are left to believe.

But it’s the singing voices, the precise harmonic qualities, the absolute confidence between the seven performers, and the energy behind each number that seduces the audience. The sheer vigour and clarity of the vocal element of this production is almost overwhelming.

The on stage microphone technique is impeccable and the technical volume control from the bio box is subtle and never overdone.

Twenty-five year old Mitre Khammash as producer (and the up-front financial backer) is also writer and first time director after recently graduating from the Adelaide Centre for the Arts production course. What a remarkable debut as a director. A historic moment at the end of the final show when Khammash took a solo bow and the house erupted in applause and wolf whistles.

Lighting design and operation by Luke Bartholomew is stunning and even the set change black outs ever so subtly lit in green or blue or violet were theatrical statements in their own right.

Stage management by Laura Pearson (currently at A C Arts) is a difficult assignment in this small theatre. Many set changes are (tables, benches, flats) soundlessly placed in a choreographed display of true professionalism by Pearson and her backstage team.

Costumes by Melanie Pearson are the real deal. Hair and Make-up by Kassie Davies and Genevieve Carey deserve a mention, particularly when so many of the inmates had paint on tattoos, particularly the very tall Snake Eyes whose whole body had to be painted up each night.

And the venue? Theatre Two, Star Theatre, Hilton. One of the best small proscenium arch stages in Adelaide. Malcolm Harslett (Mighty Good Productions) in whose capable hands the Star Theatre complex has been run for many years has done a fine job in presenting the space and providing this unique inner suburban performing arts venue for new talent. Bravo Malcolm!

How does one sum up such a rewarding audience experience by a talented team of, on the whole, new to the performing arts practitioners? By taking risks and supporting local talent (onstage and back stage and technical) here, in Adelaide, before they drift interstate or overseas.

Itʼs a ten out of ten from me. Will there be a sequel? If I told you, I might be killed by Snake Eyes!