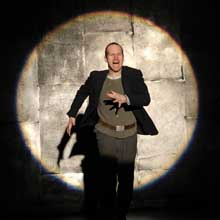 Earlier in the day, reefing through a copy of Homerʼs ‘The Iliad’, I wondered how one actor would bring to life this classic tale of war, treachery and machismo... 550 pages of detailed story line and rich characterisation.

An empty stage - right to the back wall; masses of stacked theatre lamps; a wooden table and chair and a dimly lit auditorium - no one was home.

Then a single spot lit a scruffy man in an old coat and hat. He carried a suitcase. But when Denis OʼHare opened his mouth, strolled towards the front of the stage, and made the comment that the story was better told in a pub, the audience understood his words immediately. This was not going to be a dry rendition. ‘An Iliad’ was a total theatrical experience and a truly contemporary re-telling of Homerʼs ‘The Iiliad’, the penultimate war story.

Homerʼs original contains all the great elements of a dramatic yarn... a nine years war between strong competing armies (The Trojans and the Achaeans); strong warriors (Agamemnon, Achilles, Paris, Menelaus and Hector); the gods (Zeus, Apollo, Hermes and others); human passion, wholesale destruction, and much more.

OʼHare condensed all of this into a witty, fast paced, lucid yarn that involved the audience, firstly as strangers who had dropped into his space, then as willing participants in his dreadful tale of pride, collateral damage, and in the end, total futility.

The width and depth of the Dunstan Playhouse stage was navigated with consummate ease by OʼHare. There were many visual actor/ audience connections enabled by the spill of light from the stage and even the odd audience interjection was absorbed into the, at times, improvised line delivery.

OʼHare was supported by the double bassist / percussionist, Brian Elliingsen, through nearly the entire production. In his own right Ellingsen brought great depth and poignancy to this lyric production and many times his ʻvoiceʼ shone out as strongly as OʼHareʼs.

The lighting was both subtle and dramatically strong but always in context. What seemed like a small one man show in a large space became a very large show in what sometimes seemed like a very small space. We are talking big Greek war here, all done with a table, chair, suitcase, voice, live music, technical effects, but never over the top and always in context.

Co-authored and performed by OʼHare and co-authored and directed by Lisa Peterson, this production does more than transcribe theatrically, Homerʼs The Iliad, but develops the theme that all wars are deadly from recorded time to the present. When is enough, enough?

This is a captivating production that captivated its capacity audience from the first word Oʼ Hare spoke to the final standing ovation.

When: 4 to 8 Mar
Where: The Dunstan Playhouse
Bookings: adelaidefestival.com.au