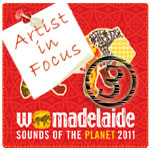 Headed up by the multi-talented and much-loved Irish accordionist, Alan Kelly, this high-energy quartet will have you step-dancing through the grass as they present a uniquely modern blend of traditional Irish and world music.

Anyone who can make the piano accordion cool in 2010 is worth a look and Kelly has this kudos in his resume.  He is hailed as transforming the languishing Irish folk scene with his critically acclaimed debut album ‘Out of the Blue’ in 1997, bringing it kicking and screaming into the twenty first century to a new generation of fans.
An avid musician from the age of five, Kelly is master of the whistle, fiddle, piano and accordion. With three solo albums and numerous collaborative efforts to his name, he brings the most recent release ‘After the Morning’ to this year’s festival.
Joined on stage by Tola Custy (fiddle), Donogh Hennessy (guitar) and Steph Geremia (flute/vocals), the Alan Kelly Quartet will present their unique mix of folk, rock, salsa and jazz when they perform evening sets on Saturday and Monday.

A brother-sister pair from the Northern Beaches of Sydney, the duo of Angus and Julia Stone herald from a musical family that had them performing on-stage as soon as they could hold instruments.  Since their 2006 debut release, Chocolates and Cigarettes, they have slowly built a reputation for making beautiful indie music.
Delivering laid-back sounds full of soulful melodics and lyrics, the pair draws on love, life and their frequent travels in writing their music.  Subsequent albums have gained releases internationally in Europe, UK, USA and Asia, but the 2011 Womadelaide appearance will see the pair perform off the back of enormous success with their fourth and latest album, Down the Way.
Released in 2010, it debuted at number 1 in Australia and gained them Aria awards for Album of the Year and Single of the Year for ‘Big Jet Plane'.  Most recently, they have also been crowned the people’s choice for 2011 by winning the top spot in Triple J’s listener-voted Hottest 100 competition.
To see Angus and Julia Stone, don’t miss their one-and-only performance on Friday night!

Listen to Angas and Julia Stone {play}http://www.womadelaide.com.au/system/audios/4/original/09 Walk It Off.mp3{/play} 3:24 "Walk it Off"

Hailing from Wellington, New Zealand, the Whitireia Performing Arts troupe is comprised of 14 past and present students of the Whitireia Community Polytechnic dance college.  Attendees study a range of performance subjects covering live sound, acting, performance, dance and commercial music programmes, with the aim of achieving a certificate, a diploma or a bachelor degree in Applied Arts.
The group performs traditional and contemporary New Zealand dance, with an emphasis on authentic movement, musicianship and costuming.
Catch Whitireia Performing Arts when they hit the stages of Womadelaide in Saturday afternoon and Sunday night slots!