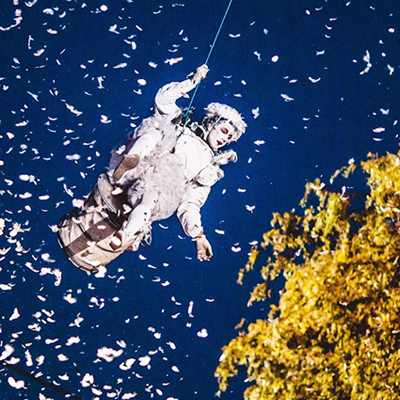 The ultimate moment of this year’s festival is the masterpiece Place des Anges (Place of Angels) by Gratte Ciel.  The spectacle has toured the world since finally convincing an Arles festival director to let them stage the incredible aerial show.   The work is the result of a collaboration between technical director Stephane Girard and the late Pierrot Bidon, a rule-breaking French circus director and promoter who is considered a "founding father" of the New Circus movement, which ousted animals, clowns and children from circuses to bring them back to their vaudevillian roots.  His circus shows were sexy, dangerous and strictly after hours.

Place des Anges tells the story of a group of angels who, given a day's reprieve from their do-gooder lives in heaven, are lured to the temptations of earth.  As they fall from the heavens, feathers falling from their wings, they play and frolic and revel in their freedom.  Some float, others glide, and others still shoot across sky so fast that if you are facing the wrong way, in turning you will miss them.  It's a heavenly party we are invited to view, and the finale is like nothing you'll experience again.

Set high above the tree line, the show draws the audience’s eyes up to the heavens, re-connecting us with the night sky.  Previously, the show has been performed in urban settings, with the zip lines crossing over head between buildings and monuments.  The aim was to juxtapose the angels with modern city architecture, highlighting the meeting of the celestial with the industrial.

WOMADelaide is the company's first opportunity to stage the performance within a natural space and it creates a whole new dimension.

The zip lines crisscross the sky above the festivals main Foundation stage, strung between cranes which seemed imposing in the daylight but are obscured by night fall.  The anticipation begins some time before the show evens starts, as in the dusky sky you start to glimpse white figures inhabiting the top of the cranes during the show preceding theirs.  The mind boggles at what might be coming.

By the time their moment arrives, the sky is dark and you can barely see them.  A fierce, otherworldly soundtrack starts and suddenly, angels appear in the sky.  Intense spotlights guide your eye, so you don't miss a thing.

As the show progresses, the non-uniformity of the "stage" gives the effect of the angels appearing and disappearing as they fly overhead; the trees masking their entry or exit in the dark.  Some fall all the way to the ground and disperse into the crowd, giving many mere mortals a chance to glimpse a white-clad, feathered angel walking among them, sometimes close enough to touch.  The angels are excited and happy, their eyes also cast upwards to the aerial show.

A one point, the lights die and the audience gaze around, wondering what comes next.   From the left of the stage, a giant white shape looms larger and larger until one can see it in full - a huge cherub floating over the audience, soaring up to the zip lines and dipping back down almost within grasping reach.  As it makes its way across the crowd, angels wheel above dropping a cyclone of feathers.  What follows can only be described as a feather storm, as they burst from the ground and fill the air like snowflakes; the faces all around a picture of joyful surprise and awe.

The company is comprised of a 16-strong troupe of aerialists, gymnasts and dancers (all brave beyond belief), with another 16 supporting cast and crew integral to making this wonderful performance happen.  Every spot on the ground affords a slightly different view of the spectacle, and there are no bad seats in this house.   For those with four-day passes, every night is a new experience.

It cannot be guaranteed that no pillows were harmed in the making of this performance.