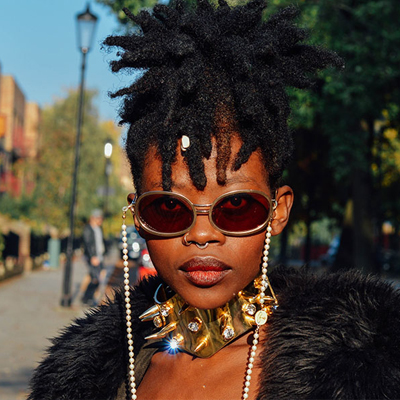 In a performance that stays with you, JoJo Abot is a blast of cool style and back-stiffening attitude.

Originally from Ghana and now living in New York, Abot spends her time contributing to creative communities across the globe and expressing her art music, film, photography, literature and performance.  She recently emerged from a stint in New York as part of the New Museum's incubator program, NEW INC.

On her first trip to Australia, Abot is brightly and elaborately dressed with gold face and hand paint which glitters in the setting sun that bathes Stage 2.   Her striking stage presence has you transfixed with all eye on her.

Abot's music is as intense, hypnotic and varied as she is; a wall of experimental sound that moves your body and mind.  She is joined on stage by drums, keyboard and two dancers as she performs songs from her album Fyfya Woto.  Singing in English and Ewe (spoken in southeastern Ghana), Abot's sound is a mix of electronica, reggae and Afrobeat, but can be much better described by how it feels rather than its musical styling.

Abot's songs are imbued with her passion, it's intense, earthly, sensual and sorrowful.  Her vocal range is impressive, and she moves between soaring highs and guttural growls with ease.

In a set that is much more than a music concert, Abot talks to us, mentors us, empowers us with her words, dance and music.  In her own words, Abot wants to "share this moment" with her audience, and she urges her audience to stand up to injustice and say "To Li" (rhymes with bulls**t) when we see it.

Her voice is a defining example of modern Africa; worldly, influential and ready to change minds.  May we all go forth as brave as she.