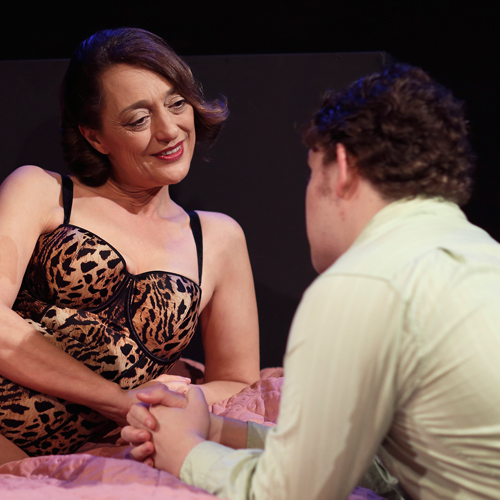 Here’s to you, Matt Byrne for giving audiences a fly on the wall experience of the privileged upper middle class of mid-sixties America in Matt Byrne Media’s (MBM) latest production; the Terry Johnson adaptation of Charles Webb’s novel The Graduate.

One word comes to mind, ‘Plastics’.

Not as a reflection on the production, but on the characters laid (and laid again) out before us. Just when one feels they could invest in a character, one realizes there is little to like about them and withdraws quickly from the investment.

Interestingly, for a play about the 60s, little is dated about the storyline. Rather what is presented seems to reflect much of the lost generation, ‘Kardashian’ way of life often fed to us over the airwaves. As a result the shock value of the cougar and college graduate relationship is quickly diminished in favour of trying to work out just how empty these human vessels are. If you are looking for character arcs; prepare for a long search.

All that said there are great performances in this presentation. As Benjamin Braddock, the graduate, Nathan Quadrio plays with skill and nuance. Making sense of conversations that heighten and drop at the intake of a breath takes insight into the acting conventions and styles of the mid-sixties. Quadrio has certainly done his homework.

As the ‘Delilah’ Mrs. Robinson, Niki Martin brings a complex, strong, manipulative character to the stage in what could have easily been something much shallower. Her delivery of the iconic line “Would you like me to seduce you?” gives a sickening insight into how those who prey, twist a situation to make them seem the preyed upon. There is a frightening chemistry between these two on stage even in the most bizarre post coital conversations that ensue. Interestingly, even after months of intimacy with her, the graduate still insists on calling her ‘Mrs. Robinson’ (figure that one out Freud!).

Which bring us to the elephant in the room… the sex scenes. Subtlety has never been the hall mark of an MBM show, and this production follows suit. While montage is a great way of showing time passing, there are titters from the audience as positions changed, and the dialogue of the parents during the montage is lost as we all wonder, what are they going to do next? Enough said!

There is significant nudity in the play, but Paul Tossel’s lighting design keeps these moments tasteful and the nudity less the focus than the on-stage character’s reaction to it. Costuming by Sue Winston and set design by Matt Byrne all give a true sense of the era.

A special mention to Hannah Tulip for her work in the role of Elaine Robinson, her performance is strong and honest. The rest of the cast, many of whom play multiple parts, work well in ensemble with the two leads; Tim Cousins and Heather Riley, as the graduate’s parents, and Matt Byrne as Hal Robinson all give fair performances. Some care should be taken in the more furious exchanges as words are lost in the emotion of the moment.

A significant part of the film was the sound track. Most people remember the song Mrs Robinson (originally titled Mrs Roosevelt), but one might argue that the most iconic song began and ended the story, Sounds of Silence. The MBM production makes good use of the Simon & Garfunkel soundtrack in the scene changes and as the audience gathered.

Matt Byrne Media often choses to tread where others dare not. It is certain there will be a number of conversations that will spring from this production asking about the validity of presenting a play about seduction, intent, infidelity and using alcoholism as an excuse. Perhaps that is why a plays such as The Graduate do need airing, if only to keep the conversations going.