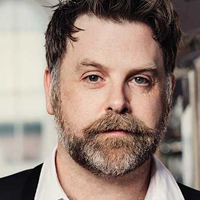 If you like your cabaret with multiple slices of humour, a lash or two of satire and comedy and a dash of the risqué, not to mention copious amounts of one night stands and long weekend lovers,  Songs From an Unmade Bed is your very strong cup of tea.

Performed in the intimate surrounds of the Artspace it is a fly on the wall/ diary account of one New York gentleman’s intimate adventures with same sex lovers.

This is a song cycle, not a musical and traditionally not a cabaret, nothing spoken, all sung and masterly orchestrated for small ensemble (piano, percussion and cello – each wearing pyjamas), but in the capable hands of Michael Lindner (singer/performer) and Musical Director Geoffrey Castles (pianist) this was a belle Cabaret Event.

Lindner (also stage designer) moved from one number to another creating snapshots of nights of passion, loneliness, loss and indulgence in what seemed effortless bliss as a performer. Vocally Lindner is a powerhouse, his range, colour, texture and articulation are a master class in song performance. He has the ability to convey emotion, mood and dynamic while supporting some wonderfully sublime notes in the upper range. He knew his music well and the trust and sense of ensemble he had with his musical director Geoffrey Castles was unmissable. If I am to be picky, and I am, I would have enjoyed a moment or two longer between each number to catch my breath, ponder the emotion and prepare for the next song.

Opening night saw some issues with lighting, the pianist occasionally having to indicate they needed light and the disco number ‘I want to go out’ was sung mostly in darkness, which seemed strange, although having ventured out in my youth to some of the seedier venues in Adelaide, perhaps it was apt. On the very up however Michael made very clever use of the small stage space, (a bed and some sheets strewn on the floor), and the members of the orchestra who shared the stage, interacting with them in a way that helped create the moment for the totally engaged audience.

There were plenty of laughs, giggles, guffaws and the occasional uncomfortable moment in the evening, as the songs waxed lyrical about the various sexual exploits of our hero. By the end of the hour it would be fair to say, from the applause, that most of the audience had got comfortably into bed with their own stories.

When: 14 to 16 June
Where: Artspace
Bookings: bass.net.au