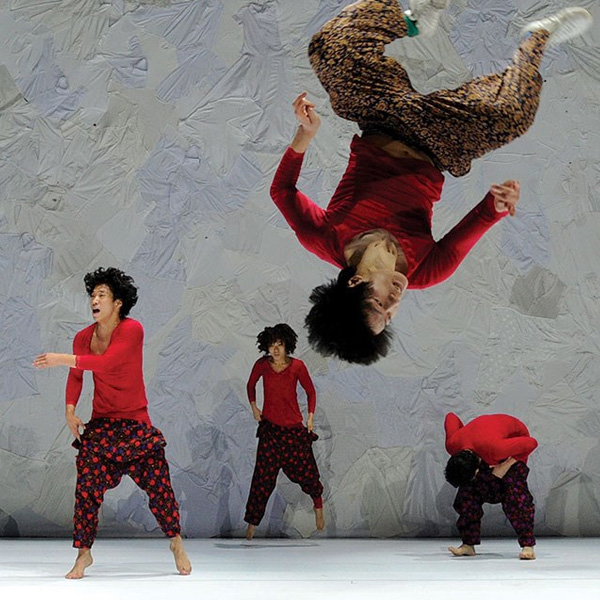 Many weird and wonderful offerings from Korea have been seen on the Adelaide stage, but perhaps none more “out there” than the Dancing Grandmothers.

It is the creation of Eun-Me Ahn, a Paris-based Korean choreographer and artistic director. This work is her paean to the women who founded modern Korea. But first, it is a half hour of intensely frenetic physicality from whom one assumes are the dancing grandchildren. They are lean and lithe and they prance around and around the stage, on and off, up and down, tumbling and dropping and cavorting and trotting and skipping, from time to time changing costumes until they work themselves into a frenetic frenzy and end up twitching and writhing on the floor like a pack of dying insects under a street lamp. This dance piece lasts for over thirty minutes and is accompanied by deafening, pulsating techno-trance music. It is not exactly fun. In fact it is a bit tedious and leaves the ears ringing. It is a case of suffering for art. One feels that Eun-Me Ahn is trying to tap into the vein of the great Pina Bausch but ending up with Pina-on-speed madness. There is relief ahead, however.

In stark contrast to the aforementioned assault of musical volume, the grandmothers are delivered in silence on a great big screen as video clips; lots of grandmothers in their Korean homes and workplaces doing dear little jiggly dances. They can hear music but we can’t. It seems they are all dancing to the same tune. The audience finds it all quite comical but in fact it is rather poignant. The worlds in which Eun-Me Ahn has filmed the grandmothers are harsh and deprived. These are predominantly poor people. They are in cramped little apartments, tiny crowded shops, street stands, building sites, farm fields, and kitchens. The whole set of dance clips is quite fascinating and very much in the classic style of YouTube's dancing-man cult which was the big meme in early internet days.

Following this, the real live dancing grandmothers arrive on the stage and perform very much the same sort of simple jiggly dancing, mainly from the arms. The grandmothers come in different sizes and attire, escorted on and off the stage by the super-fit grandchildren dancers of the troupe. They dance solo and group pieces, at first restrained but with encouragement from the young, with increasing verve. Their personalities emerge. They are appropriately adorable.

The troupe turns on some more conventional dance before the show is quite over, and with less aggressive music. It is much more fun and at all times bright and colourful. There’s some silly dance shtick with trousers and some fun with mirror balls and when the show comes to a divinely elegant ending, the audience is effusive.

The show features some splendid lighting on the wide, open stage and some very appealing costuming.

There’s some quaint jazz and Euro-crooner music and, thank heavens, a zing of the spirit of K-pop.

It’s a show full of zany ideas and it is not likely to be forgotten. It is gorgeous quirky modern Korean fare and a suitably provocative opener to the festival.

The grandmothers and the whole idea of them are welcome joys and, at show’s end when Eun-Me Ahn invites the audience onto the stage, there’s almost a stampede of enthusiasm.