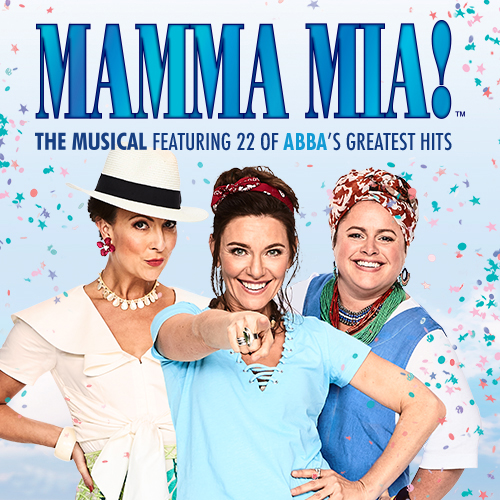 The Plaza renovations may be creating ugliness and stress on the outside but inside the Festival Centre there is nothing but unadulterated joy and good spirit.  Mamma Mia! is in the house and the house is bursting with happiness. This show does not get a standing ovation. It gets a dancing, bopping sing-along ovation as it thrills with a stream of high-energy encore numbers.  And the cast seems to be as happy as the audience it has just enchanted. It’s an audience-cast love affair devolving from a show which is all about love affairs.

Of course it’s all pure corn, a well-worn story woven around a songbook of dear old Abba hits.

Sophie invites to her wedding three men who had affairs with her mother in the hope of identifying her father. The mother is aghast and the men perplexed as they work it all out amid a bevy of colourful wedding guests and island locals. There’s a torrent of favourite Abba songs and, in the case of this production, some absolutely gorgeous spirited choreography.

Few people have not seen the film and its sequel and millions more have seen the musical. The program stats rate it at 60 million so far and its popularity is not waning. It was the feminine spirit of Benny Andersson and Bjorn Ulvaeus’s songs that inspired Judy Cramer to create the show and after its opening in London in 1999, it has just gone on and on sweeping around the world.  Now a new generation is lapping it up.

The Australian principals are very well cast. They are maybe not familiar to Adelaide theatre goers, most of them having achieved their career profiles in the television world. It does not take long for them to establish their characters and bring together the comic and emotional core of the show.  There are lots of laughs and a little bit of misty-eye as well as an old fashioned moral to the story.

Sarah Morrison plays Sophie, the young bride-to-be. She has all the goods, voice, high energy and a pleasant persona which comes across. But, of course, her character and her song list is outweighed by her mother, Donna, who is performed by Natalie O’Donnell. It is a huge role with big numbers, quite exhausting, but talented O’Donnell powers through tirelessly. Donna’s two Mamma Mia Super Trouper girlfriends are a particular key to the show. The old friends, Tanya and Rosie, are the comic magic of the plot and Alicia Gardiner and Jayde Westaby flesh them out with vivacity, musical richness and utter hilarity.  If anyone steals the show, it is Westaby, long, lean and lithe and blessed with exquisite comic nous. She is one of those rare performers who effortlessly connects with the audience. Gardiner, however, has the to-die-for voice. She’s Australia’s latest Big Mamma.

Ian Stenlake makes a hero’s meal of the handsome ex-lover Sam. His performance breathes romantic tension onto the stage and he can certainly belt out an Abba song. As the other potential fathers, Josef Ber and Philip Lowe, balance out the fun and games with their humorous old-lover-boy characters while Stephen Mahy is all muscles and good looks as the modern-day fiancé.  Sam Hooper is the acrobatic fool of the show, the tumbling funny Pepper and everyone loves him. His island mates are well-wrought and their dance in flippers is one of the highlights of the night.

The ensemble work is suitably fabulous, whether it’s the huge cast popping out of the doors and windows of the taverna or out there en masse doing a big number.  There is lots of complex choreography and planning in those numbers and wherever one looks, there’s some comic business going on. Behind the Greek taverna scene, Michael Azzopardi has a fine band pounding out the good tunes.  And it’s all simply jolly good fun. It’s a ticket to downright feel-good, and as the world is turning right now, it comes as a precious tonic.