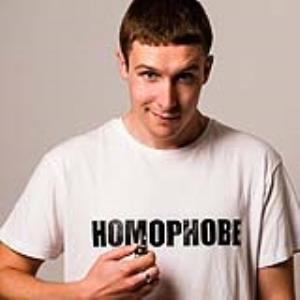 His real name is Lawrence, which he tells us is Scottish for gay, although he thinks ‘poofter’ is a better word because it is clearly manlier and less gay! ‘Larry’ seems less obvious, and it’s not at all obvious that Larry Dean is gay – happy yes, but not gay!

And so the show begins in the intimate and middle-classy upstairs-club confines of Sugar, and sweet it is.

Larry Dean is one of the nicest and most personable stand-ups you could meet, and he has the most dis-arming eyes. In an instant he looks right through you, grabs you, and sucks you into whatever gag he wants to deliver. Even the très risqué ones are all of sudden inoffensive - almost!

As the title of Dean’s show suggests - Out Now - it’s all about him being a gay man and the oh-so-funny aspects of his coming out.

The audience dissolves in laughter when in an almost matter-of-fact voice he tells us that his sister is a lesbian and his brother is a catholic priest and he was his parent’s last hope for grandchildren!

The laughs come thick and fast, and it’s all inoffensive and light hearted stuff. We come to know about his family, his African flat mate, his disastrous first (and only) heterosexual experience, his love life, his first stand-up gig that could have gone better and his first impressions of Hindley Street! It’s a whirlwind 60 minutes and then it’s over. We now want to spend some real time with him, with laughs put to one side, if that’s indeed possible!