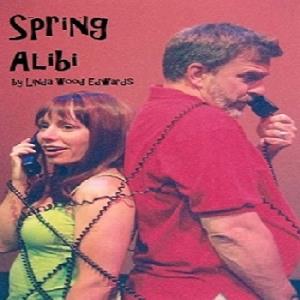 Marlene and Mac find themselves in a Yukon town in far northern Canada in the springtime. Just as the moose and elk get frisky when the snow begins the melt and the days get longer, it's mating season in the libraries and bars. She is from Saskatchewan and is hiding out after a relationship gone bad. He needs the dough and is hanging gyprock for the foreman.

It has all the makings of a boy-meets-girl story and that is exactly what you get in Linda Wood Edwards's play. It's very cute and sweet. Even the rude bits are conveyed apologetically. Sue Huff's, Marlene is bubbly and cautiously open to new experiences including releasing sexual tension all by herself. Andy Northrup's, Mac is a nice guy blue collar bloke who stumbles across a couple of mating possibilities. They each have a good friend at the end of the phone line who gets the play-by-play from the Yukon as things progress. In fact, Marlene and Mac never actually speak to one another until finally. This uninterrupted device I found tiresome. They weren't doing anything I couldn't easily imagine from the script and the explosive possibilities of watching people in expressive conversation were absent. "Why don't you just hang up the phone and talk to me?" I wanted to scream.

Director Kevin Tokarsky got a lot out of his cast and Woods created a sympathetic portrait of the far north lifestyle. Most people - and most people are men - are up there for the work, and it's hard yakka. The jobs are short term contracts, you eat crap trying to save money or because it's easy, drink lots of beer, friends send you pornography, and you're lucky if there's anything to do, if you're not beat from seven 12 hour shifts in a row. The snow and cold is as isolating as the heat is here, but the isolation has its own beauty. It's the Canadian version of the Pilbara or north Queensland and I'm sure many folks would find the comparison interesting.

I nearly hung up on Spring Alibi, but there is enough to stay on the line.