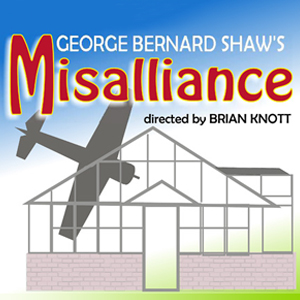 In a thinly populated Arts Theatre, the opening act of the first night of George Bernard Shaw's Misalliance went on....and on....and on.  Written in 1910 - a time ripe with post-Victorian, new-fangled machines and ideas - Shaw subtitled his comedy, A Debate in One Sitting.  The rather dense Shavian gabfest is set outdoors - or was it indoors? - of the grand country home of a hard-working and self-made underwear manufacturer and merchant, Mr Tarleton, and involves his family, potential in-laws, and some guests who drop in.

Generally, director Brian Knott's cast heroically struggles with making the material clear in the first act, but one can discern amusing witticisms, sarcastic remarks on the strictures of the age, and ironic takes on social life. This is not to say that any of Anna Bee, Peter Bleby, Lindsay Dunn, Simon Lancione, Mark Drury, or Julie Quick didn't do their duty, but that the exchanges of lines didn't gel into a conversation.  Indeed, Julie Quick was possessed with a poise that stole every scene she was in.  Lindsay Dunn was quietly madcap as the talkative Mr Tarleton.  Peter Bleby's brilliantly hesitant line delivery would almost make you think he was on the brink of forgetting his lines if you didn't know better.

Just when I was checking my watch at what turned out to be near the end of the first act, Shaw parachutes two fresh characters into the play; a pair very unlike the by now stultifying existing; with a reveal twist for the audience to ponder over their two dollar coffees and teas during intermission!

The second act nearly redeemed the sins of the first.  Adam Tuominen and Leah Craig were great as the nattily dressed aviating newcomers.  The always good Tuominen Errol Flynned his way - cutting a swathe through the Tarleton household.  I don't know if Leah Craig's accent was authentically Polish but it was amusing and it worked for me completely.  Her Lina's dominatrix demeanor made every weak willed male character ask for more, as well as a few in the audience.  That was amusing, too.  In fact, the entire play blossomed like a rosebud in the second act thanks to the aviators helping to create a semblance of a plot, Shaw opening up the dialogue, and the cast handling it with aplomb.

Oh, I nearly forgot.  There was another character in the play who suddenly intrudes and debates with Mr Tarleton on things Shaw wanted to say - this time, mostly about socialism - performed rather strangely by Leighlan Doe.

The set was a bit squashed (set design: Alex Strickland) and all the action was mundanely in a line at the stage curtain.  The costumes were fantastic (wardrobe: Aubade).  While Shaw covers an enormous range of topics, his insights into the relationship between parents and near adult children ring as true today as it did over a hundred years ago, so it's not just Apple and Foxtel causing the brink.

Now you may well ask, am I advising you to see this play, or what?  What's the scoop?  Let me put it this way.  I think the whole shebang will mesh better later in the season than it did on opening night, and if you are a Shaw fan, you should see it.  If you are not familiar with Shaw, you should see it.

When: 11 to 20 Sept
Where: The Arts Theatre
Bookings: trybooking.com