Summer Of The Seventeenth Doll 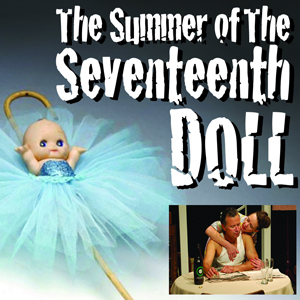 I once had my own ‘Summer Of The Seventeenth Doll’.  I had met this new girlfriend and I was telling her about my Christmases in Canada.  My parents would put up a tinsel tree upstairs and a real pine one downstairs and laden them with the traditional decorations.  Mum would make a huge Christmas Eve dinner of meatless Polish and Ukrainian foods, and again the next day, a Christmas turkey with all the trimmings.  We would have a dozen family members around the table.  Christmas morning was busy with loads of people who stayed over ripping open their presents and the radio station playing non-stop Beatles' music.  I hadn't been home for Christmas for two years and I asked her to come with me and she couldn't wait.

It was awful.  I did not understand the full catastrophe of my Mum's dementia, and there were no people staying over, no opening of presents in the morning, and no big dinners; the radio station didn't even play The Beatles any more.  And my girlfriend wondered what the hell I was talking about.

Ray Lawler's 1955 play is of perfect construction, like Arthur Miller's ‘Death of a Salesman’ and ‘All My Sons’.  A family - of sorts in this case - has expectations of continuing fortune, but there is a tragic flaw in the highly respected head of the household that is dramatically revealed and leads to a restructure of the relationships and unforeseen outcomes.  The plays are also about memories and nostalgia and what meaning we assign to them.

Director Jude Hines does a fabulous job bringing this classic on stage.  The hard yakka of manual cane cutting is brought to the fore by showing segments of the 1948 production of ‘The Cane Cutters’ between the scenes.  Her evenly strong cast play up the vernacular to delight the audience.  Maxine Grubel and Allison Scharber foil beautifully as the dreamer and the realist.  Rodney Hutton and Glen Christie as the protagonist and his sidekick evoke the same blokey mateship as in the film of the real deal cane cutters.  Christie is wonderful as the talkative and sometimes delightfully drunk persuader.  Penni Hamilton-Smith was born to play Emma Leech and made the most of Leech's wisdom and ways.  Eleanor Kay and Jonathan Johnston had smaller roles that you wish were bigger.

The whole shebang was presented in style by Nick Spottiswoode's set, and costumes and looks by Ian Rigney and Heather Beasley.

Yes, this reverential production made me reflect on my own "Doll" moment and is a great insight into how little we are aware of our delusions.  A great play well done.

When: 21 to 30 Aug
Where: The Arts Theatre
Bookings: venuetix