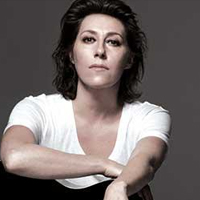 What was it Tolstoy said about families? That all happy families are the same but each unhappy family is unhappy in its own way.  Not that the Wainwright -McGarrigle family was all that unhappy. Rather, they made unhappiness a favourite subject in their prolific and very memorable songs.

The McGarrigle Sisters – Anna and Kate – wrote plangent songs about hearts like wheels, and dancers with bruised knees. Similarly, over dozens of albums, Loudon Wainwright mapped both his heart and his family in songs – celebrating his infant son Rufus (‘Rufus is a Tit Man’) recalling altercations with his young daughter Martha (‘Hitting You’) among numerous other wry and disturbing confessionals about his anger, disappointment and remorse for the end of his marriage to Kate, and the deteriorating family relationships that followed.

It was keeping up the family tradition then, when Rufus Wainwright’s star was rising that he praised his mother and denigrated his absent father, and Martha took it one further, on her self-titled first album, with her famously plaintive diatribe to Loudon – ‘Bloody Mother Fucking Asshole’.

Time has passed and hatchets have been buried and Rufus and Martha have not just become successful in their right but are as celebrated as their parents - perhaps, even more so. Also, much has changed for the family – most particularly the death, from cancer, of Kate McGarrigle in January 2010. Raised in Montreal by their mother, both Rufus and Martha were devoted to Kate, inspired and encouraged by her music, and devastated by her untimely passing.

Not long after Kate’s death, Rufus spoke at length about his relationship with her in a film documentary charting his career and music including his then current opera project, aptly named Prima Donna. Now, three years later, in far more modest mode, Martha Wainwright is touring a new CD – Come to Mama, in part, a tribute to Kate, also a reflection on her relationship with husband Brad Albetta and their son Arcangelo.

Martha Wainwright’s Cabaret Festival set at the Dunstan Playhouse is a reminder of how brilliant, volatile, appealing and irritating she can be – often all at the same time.  The opener is ‘This Life’, from her first album -  “This life is boring, this life right now is snoring, that’s alright , that’s OK… “ Dressed in polka dots and yellow shoes, she threads herself into her restless lament, tossing her blonded bouffant hair, jerking her arms, bending her left leg in what seems like involuntary spasm. The bass thrums, the drum pulses, the vocal is softly robotic – Laurie Anderson style, like the bridge change later – then her voice soars into agitated repetitions: “there’s a song, a song, a song in my head” – and it is classic Martha.

The new material predominates. With its jaunty tempo, ‘4 Black Sheep’ belies its dark theme of youthful risk-taking– and the synth effects and vocal reverb (as elsewhere in the set) obscure the lyrics. But the singer is gathering momentum. ‘Can You Believe It’ adds girl-pop chords (check Blondie and Chryssie Hynde)  and ‘Some People’, with more woozy keyboards and a deathwatch drumbeat is a mournful night ballad – “I don’t mind the rain on my head.”

The excellent ‘All Your Clothes’, with its simple acoustic arrangement showcases Martha Wainwright at her best. The first of the tribute songs to her mother, it gently captures the need to find traces of a departed soul – in memory, in objects such as garments and, for Kate, in music. A little known song from the McGarrigle repertoire  (about to be released on a CD named Oddities)  ‘My Mother is the Ocean Free’ also features Wainwright at her vocal best with harmonies from bassist (and husband) Brad Albetta.

Mixing things around again with ‘Jesus and Mary’ from her second album, Wainwright drily remarks on the fact that her show so far has been short of cabaret numbers. Remedying this are two songs from her Piaf record - Sans Fusils, Ni Souliers, a Paris. After a lengthy, light-hearted intro and translation, she launches into an excellent, if histrionic, ‘L’Accordioniste’. Recently I wrote that Bernadette Robinson had over-oeufed the same song, but in her zeal Wainwright not only over-eggs she near scrambles it. At times her music is the sound of one hand wringing, and it is a pity because she has real power and presence and doesn’t need to vamp it. Her other Piaf selection, ‘Soudain une Velle’, by welcome contrast, is a sudden glimpse of a subtler musical landscape.

The highlight of the night, and Martha Wainwright makes sure that it is the case, is a song written by Kate McGarrigle only a few months before her death. ‘Proserpina’ is the centrepiece of the new album and it is also for Wainwright’s set. The song recalls the myth of Persephone and the origin of the four seasons, most especially the return from the death of winter to the rebirth of spring. It is a marvellous song, beautifully rendered with acoustic guitar and a simple, bell-like Kate McGarrigle vocal.

It was quite the place to draw a close, but - encores being what they necessarily are - Martha comes back for her signature diva song, ‘Stormy Weather’. Again, it is snazzily sung and enthusiastically received- but, for me, accompanied with so much writhing, hair tossing, face rubbing and general meteorological voguing, it diminishes a great blues song - and once again proves that, to touch the true heart, simple is best.