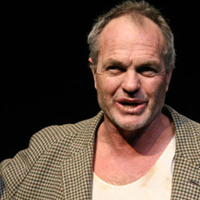 If you thought Australians sometimes conducted themselves poorly in Bali, those amateurs have got nothing on the star of this show. This is a tale of an Australian vagabond on skid row in Paris, where the drugs flow freely from Amsterdam and the seedy underworld corrupts lost souls.

Our unnamed anti-hero (also performed by Stephen House) has been drifting around travelling for some time before settling in Paris, where his declining mental health and various addictions lead him on a downward spiral. Unhinged, erratic and slightly delusional, we come to understand a day in the life of this dysfunctional wretch and the chain of events that led him there through this one-man show.

With only a shonky hustler named Romano and a troubled women named Caroline to call friends, his vulnerability now leads him to carry out degrading and illegal acts to make it through another day. No longer able to get by on his youthful good looks, the trappings of a carefree life have brought nothing but a harsh reality – painting Paris as an unforgiving backdrop for his woeful existence. Rather than being completely oblivious to his circumstances, this public nuisance is conversely very articulate that all is not well, but has dug a hole so deep he simply cannot climb out.

This show does not immediately enthrall, but given we are examining a broken man that is hanging by a thread, it would be realistic to expect that he would not have the confidence to grip the audience with both hands. Instead, our vagabond gives an honest and emotional account of where it all went (and is still going) wrong, evoking rich and candid images as his story unfolds.

Not a show for the faint hearted, Appalling Behaviour features talk of many of the elements you’d expect from such setting: prostitution, underground sex dens, drugs and filthy language being a few. However, rather than feeling disdain for this unsavoury lifestyle, his unwavering humanity simply makes it all very sad to behold.

Simplicity was the name of the game for this production. The set design consisted of just a black backdrop and a handful of blocks that were moved about sporadically and with a jolting thump to create a change of scene. In keeping with the theme, the sound and lighting intervened only on occasion. However, when it did it added tremendously to the ambience.

Likewise, House authentically embodied the vagrant essence, wearing only a scrappy pair of jeans, singlet and cardigan, and clinging to his sole treasured possession - a courier bag (full of hash); this item also efficiently doubled as the outlet for his rage as he slammed it not infrequently to the floor during his many mood changes.

Not losing his focus for a second, House displayed a highly accomplished talent for both the complex monologue and building intrigue through nothing but the power of imagination.

It mustn’t be an easy task playing an anti-hero, let alone convincing an audience of their humanity despite their waywardness. However, House’s neutral and non-judgemental approach allowed you to make your own mind up instead of immediately objectifying him as a repugnant outcast.

Appalling Behaviour is a powerful production that allows you to place yourself in the shoes of a ‘have not’, and experience a sense of life on the down and out. It’s not going to leave you with any warm and fuzzys as you make your way home, but it’s always good to get a reality check every now and then.

When: 19 to 29 Jun
Where: The Street Theatre
Bookings: thestreet.org.au