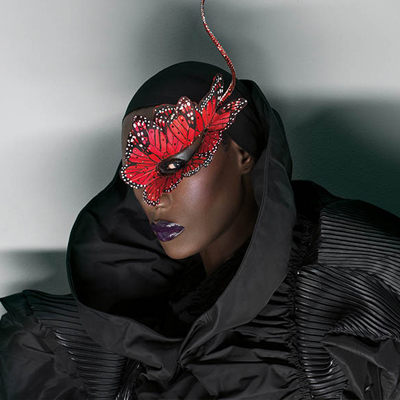 When Grace Jones takes to the stage in Elder Park - an unfashionably fashionable 45 minutes late - it is like the arrival of the Queen of Sheba at the Dia de los Muertes, day of the dead. She is wearing a shiny skull mask haloed with long black spikes and a body suit with thick, white skeletal markings that Keith Haring might have personally designed. But if this is some kind of memento mori then Ms Jones has very different plans. She’s going Nightclubbing.

The nine piece band, including two women singers, is already primed. With whip-crack drums and indolent piano chords, Jones turns Iggy Pop’s song into a statement of Stylish Intent. “We’re Nightclubbing, nightclubbing / We’re walking through town.” With its stalking, vogueing insolent gait, the song establishes all that is to follow.

We are in a State of Grace. This is the performer who defined club chic in late 70s New York, the triple-triple threat performer, airbrushed and sculpted for album covers by controversial designer Jean-Paul Goude – those Dick Tracy shoulder pads, the topiaried crewcut hair, the sheen of her complexion. She became Paris Noir redux, an Art Deco figurine for the Temple of Disco.

But whatever Goude thought he was up to – and racial stereotyping is even more problematic nearly forty years on – Grace Jones leaves us without a shadow of doubt that she is in total charge of the Jones TM. She is an empowered woman, and is now an empowered woman of three score and ten.

She has shared that power, revelled in it, and spread it around, encouraging, enticing, inciting especially her niche audiences – people of colour in racist New York City, the gay community beset with the nightmare of AIDS. It is no wonder she is so celebrated; she is not just some lazily-labelled diva, or an icon (whatever that worn-out tag is now supposed to mean). Grace Jones is a pioneer and a cultural liberator. And she invented Lady Gaga.

After she has woven her Nightclubbing way around the stage and catwalk, Jones pushes back her skull mask and it sits like a tiara above her famous face. But this is a gradual reveal. Now it’s the outsized dark glasses - and lip gloss you can see from King William Street.

The set gets underway with This is from her 2008 Hurricane album.

“This is my voice / My weapon of choice / This is life.” The lyrics are personal and characteristically defiant – “most of my crimes are of optimism / 40 thousand volts of recognition”.

Jones has always had a flair for interpreting others. Chrissie Hynde’s Pretenders classic, Private Life is an outstanding example. Moving into a reggae rhythm the band lay a sinuous riff for Jones’s sardonic narrative – “Your marriage is a tragedy / But it’s not my concern. I’m very superficial I hate everything official / Your private life drama, baby, leave me out.” The song is still a classic, and this extruded, beat-heavy version is a highlight of the night.

A cluster of Jones favourites are next I’ve Seen that Face Before (Libertango), Warm Leatherette (with community singing! Before setting out tonight, who in the crowd expected to be crooning Warm, Warm Leatherette ?) and from the 1982 album, Living My Life, another nod to her country of origin - My Jamaican Guy.

Several of the newest songs in the set refer back to her early days in Spanish Town, Jamaica and the free-spirited childhood before, aged thirteen, she moved to US with her family. It was there that her father converted to Pentecostal Christianity. After his premature death, her mother re-married - to an even stricter, clergyman, Master P (whose treatment Jones later described as “serious abuse”).

Physical mistreatment and excessive religious zeal shaped her attitudes and outlook on life. She later said, in 2015, “I am very militant and disciplined. Even if sometimes that means being militantly naughty and disciplined in the arts of subversion.”

Her newest song Shenanigans celebrates that freedom: “smoke the weed / get a little higher” as does Williams’ Blood, a meditation on family genetics and attributes. Her reply to those who ask, “Why don’t you be a Jones like your Sister and your brother Noel?” – is to repeat her free-spirited refrain “I’ve got the Williams’ blood in me.”

Similarly when she sings Amazing Grace – prefaced by “Pray for me I am a wicked child” – her rendition is not the pious sentiment of Christian acceptance. Her experiences of the hypocrisy and cruelty of organised religion are still bruised and vivid. As a matter of plain fact, it is Beverley Grace Jones who is amazing, for getting the hell out of there.

This performance is a series of masks and revelations, facets of a complex woman who can celebrate the simple hedonism of dance pop alongside a very different kind of personal introspection. And with masks and revelations come the many costume changes – a profusion of wigs, millinery, bowler hats and atavistic head-dresses, of scarves, capes, shawls, arm and ankle bangles, fur-tails, and, for the final cluster of greatest hits - her naked, elaborately painted, decorated skin.

The Roxy Music classic, Love is the Drug gets a rather hurried tempo which doesn’t suit its languid self-satisfaction, but Jones is a sight to behold, in her bowler hat, standing in a vortex of coloured down spots. Then, wearing a platinum wig which hangs to her waist, Jones and Co grind their way though the raucous carnality of Pull Up to the Bumper. With lyrics that would make Fats Waller blush, it is Grace Jones at her mischievous, transgressive best. She rolls out a giant hula hoop while several hundred kilos of gold tinsel scraps fall from above, enveloping the entire eco-system of Elder Park.

The band, led by the excellent, electric bass guitarist Malcolm Joseph, concludes the night with an extended version of Slave to the Rhythm. The sound, lighting and general production, under the excellent direction of former Adelaidean, Kamal Ackarie, has been first rate.

It is long ride as Jones moves along the catwalk, gladhanding the crowd, the huge monochrome video stage images show the star triumphant and, even as her voice begins to tire, still shining. As for the audience – what can you say? We are slaves to the rhythm. And, on a cool night in March, full of festive admiration for a remarkable artist.