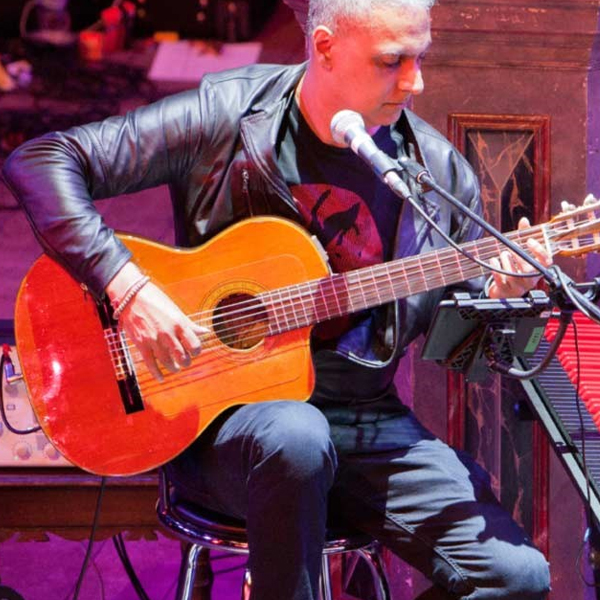 Nitin Sawhney is surely some kind of Renaissance musician. His career as producer, composer, DJ, and multi-instrumentalist has produced 20 albums, and 60 film scores, including the recent Mowgli: Legend of the Jungle. He has collaborated with Paul

McCartney, Sting, Anoushka Shankar, Jeff Beck, Annie Lennox, Andy Serkis, Akram Khan, and the London Symphony Orchestra. He has curated festivals and lectured in universities. He has performed regularly in Australia- at the Melbourne Festival and at WOMADelaide, as a DJ and musical director in 2011. Over twenty years he has been every kind of success.

His breakthrough moment was his third album for Outcaste Records, Beyond Skin. For the liner notes he wrote – “I believe in Hindu philosophy/I am not religious/I am a pacifist/I am a British Asian”.

With even more emphasis he adds – “My identity and my history are defined only by myself – beyond politics, beyond nationality, beyond religion and beyond skin.”

It is striking to read now, amidst the often bitterly contested debates of current identity politics, such implacable sentiments from 1999, at the edge of a new millennium, rejecting ideas of caste and clan, and the fetters of primitive belief. All good reasons to return to the album and perform it renewed and re-energised, twenty years later, in the midst of migration persecution, Brexit end-times and pan-national Trumpery.

On stage at the Festival Theatre, in one of only three performances this time in Australia, Nitin Sawhney is relaxed, urbane and disarmingly understated. Greeting the audience the moment he steps out he immediately introduces his band. There are just five of them – Sawhney and tabla player Aref Durvesh from the original Beyond Skin project, and three young women: violinist Anna Phoebe McElligott and vocalists Nicki Wells and Eva Stone.

They settle in to Sunset from Sawhney’s 2001 album, Prophecy. Sawhney on Spanish guitar and Durvesh, layering rhythms on drums, are like bookends either side of the stage while McElligott’s starts her swooping violin and Wells and Stone begin unfurling Nitin’s signature ethereal vocals - drawn from Indian classical traditions, but reminiscent also of the abstract explorations of Dido and even Sigur Ros.

Along with a Paco Pena composition, played with dazzling, flamenco clarity by Sawhney, other items from the Prophecy album follow – Moonrise, and with Sawhney at the piano, his tribute to Nelson Mandela - Breathing Light, which includes the quote from Mandela’s book: “We are free to be freed”.

After this interlude, Sawhney is ready to introduce the centrepiece for the evening, a complete performance of Beyond Skin in all its twelve components. He describes what a personal project the album was- recording his parents’ recollections of their migration experiences from India to the UK, gathering tracks from various vocalists such as Sanchita Farruque, and musicians from the Rizwan Muazzam Qawwali group (nephews of the late legend Nusrat Fateh Ali Khan), sampling BBC news broadcasts about India’s controversial nuclear weapons testing, and putting them all, as he says jokingly, into my “Kenwood mixer”.

The opening song, Broken Skin, begins with the words of the Indian Prime Minister announcing a successful nuclear test, anathema to Hindu philosophy and Sawhney’s own declared pacifism, and segues into the Farruque vocals – now capably managed by Vicki Wells and Eva Stone in a kind of Indian Soul with a tight backbeat from Durvesh and sinuous violin riffs from Anna Phoebe McElligott.

It is a strong, vibrant sound from the band, simpler than the richly overdubbed album, more urgent and immediate, yet incorporating the loops and disturbing political quotes which inflect and disrupt the swooning repetitions of Nitin’s compositions. Letting Go, the album’s second track is even more beguiling, with its Dido/Sister Bliss/Rollo echoes of English pastoral even as the lyrics demand breaking from traditions and habits to find a more principled future.

Homelands is a good example of Sawhney’s bold eclecticism. Opening with the Sufi chant from Rizwan and Muazzam, it moves via flamenco to Portuguese fado to emphasise the variety and range of “home”. In performance, Wells and Stone cover the considerable demands of these vocal styles with admirable panache.

For the lyrics to The Pilgrim, Sawhney looks to the rapper, Hussain Yoosuf himself to deliver the cascading words- “Life is like a puzzle not pieced yet…”. Not in person, but fed through the sound desk with a driving beat from Aref Durvesh.

The various shifts of mood between tracks work even better in performance. From the pianistic ebb and flow of Tides to the keening vocals in Nadia the compositions reveal their richness and harmonic pleasure.

In Immigrant and Nostalgia, Sawhney moves especially close to home with the intro recording of his father’s recollection of an embassy visit in India prior to migrating to England:

“They showed us Kew Gardens pictures and pictures of the various parts of England. That it is all that beautiful and everything is just right. And that’s why we just applied for the voucher…”

Sawhney is almost tearful as he describes his late father’s optimism and sense of adventure, a voice we now hear on an Australian stage. The ironies of the present day hostility to migration, and indifference to refugee displacement, were not lost on the Adelaide audience, nor would they have been at the Royal Albert Hall in London when this live version of Beyond Skin premiered only weeks ago.

Each item adds to the musical and thematic texture of this rewarding meditation – the kathak rhythms of Serpents and the sinuous vocals (Nicki Wells and Zoe Stone again proving extraordinarily versatile) in Anthem Without Nation. Concluding the song cycle is Beyond Skin, featuring the sample of broadcaster Edward Murrow reading the ominous words of the atom bomb scientist J. Robert Oppenheimer quoting from the Bhagavad Gita – “Now I am become death, the destroyer of worlds.”

For encores Nitin Sawhney and his excellent group perform Dead Man from his Philtre album and, in duet with Aref Durvesh, with Prophecy a sitar-sounding guitar instrumental he has played in many places – Nelson Mandela’s garden, in South America, and on the beaches of Arnhem Land. It is a splendidly celebratory note on which to close.