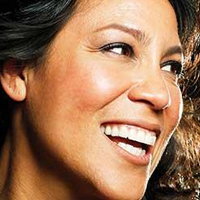 This concert left you with a smile on your face and a song in your heart, but not perhaps for all the reasons the promoters wanted.  The show was billed as “an extraordinary fusion of voice” that blends “two cultures into one”: a classically trained bass baritone (Teddy Tahu Rhodes) and a contemporary soul, jazz and pop diva (Kate Ceberano).  The two traditions did “meet in the middle” for ninety engaging and very entertaining minutes, but afterwards they would have kept going their separate ways.  By themselves they were fantastic, together they were less convincing but always heart warming and entertaining.

Ceberano and Rhodes were generous with their programming.  Apart from a little under-rehearsed banter, they virtually sang non-stop - sometimes together but mostly by themselves, which is when the magic really happened.  Rhode’s versions of ‘Hallelujah’ (the Leonard Cohen classic) and ‘Stars’ (from les Misérables) were show stoppers.  The audience was in awe of his powerful and richly layered baritone voice.  Ceberano’s performances of the 1933 Arlen and Koehler classic ‘Stormy Weather’ and the evocative ‘Bali Hai’ from the musical South Pacific showcased her talents to perfection.

Together on stage Ceberano and Rhodes oozed sex appeal.  There is clearly a connection, a bond between them. They are very comfortable in each other’s presence and clearly enjoy singing together. Their enthusiasm for, and understanding of, each other was evident and came through in numbers such as ‘New York, New York’, ‘Summertime’, ‘Unchained Melody’ and ‘Come What May’.

A highlight of the show was Ceberano’s half serious–half comical attempt at the ‘Habanera’ from Bizet’s opera Carmen.  Ceberano’s tessitura didn’t fit comfortably with what the aria demanded but her histrionics had the audience in stitches of laughter, especially noting that she didn’t speak French and Rhodes had written the words on the back of a ladies fan which she used as hand prop!  On the other hand Rhode’s had the audience shouting for more after he belted out the ‘Toreador Song’.

It was a great act, and it was greatly enjoyed by the audience, but two closer musical cultures might have met more nearer to the middle and produced an even more inspiring result.