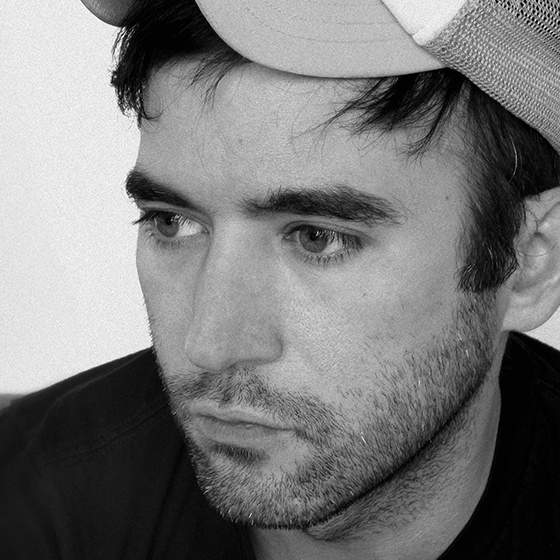 Last time we saw Sufjan Stevens it was his 2011 Age of Adz tour. Inspired by the paintings of the schizophrenic visionary Royal Robertson, the concert featured massive back projections of Robertson’s ecstatic, vibrantly coloured imaginings while Stevens and a ten piece band produced a symphonic event, festooned with samples, loops and intrepid orchestrations.

For his 2016 tour Sufjan Stevens is in lyric mode. With just four band members this time, he is showcasing last year’s album, Carrie and Lowell, his most personal album to date and, in the minds of many, his best. Stevens is a mercurial talent and like say, Prince or Beck, he can, chameleon-like, effortlessly inhabit a variety of contemporary forms from pop to prog to acoustic ballad, psychedelia and post-folk. The constants in Stevens’ music are his sweet keening vocal, his open-tuned guitar and banjo, and his incorporation of synths, piano, horns and angelic harmonies.

On stage at the Thebarton Theatre, Stevens and his associates open with Redford, an instrumental composition from Michigan. The band creates a weave of sounds – guitar, piano, trombone, percussion. It is a soothing, but inviting overture, setting the mood for what is to follow.

And what follows are the first trickling guitar notes of Death With Dignity, opening track to Carrie and Lowell. “Spirit of my silence I can hear you / But I’m afraid to be near you” Stevens sings in his soft, burred, mesmerising way- “And I don’t know where to begin.”

But begin he does, embarking on a set of songs, written after the death of his mother, Carrie in 2012. They are self-explorations, sometimes excoriating, sometimes plain bereft. These expressions of loss, anger, and bewilderment reflect the fact that he is trying to retrieve a mother he hardly knew, who left him when he was one year old.

Raised by his father and stepmother in an interfaith counterculture community in Michigan, Stevens rarely saw his mother who, living in Oregon with Lowell Brams, her second husband, suffered bipolar illness and bouts of drug dependence. When she was diagnosed with stomach cancer he visited her in hospital until her death. The songs describe his attempts to recover memories and unravel feelings, both repressed and lost to time.

I can think of few songwriters who cut as close to the emotional bone as Sufjan Stevens does in the Carrie and Lowell suite. Many singers draw on personal material – Bob Dylan, Joni Mitchell, James Taylor in the 60s and 70s delved their own experiences, but the results were, more often than not, encrypted and at arm’s length. Blood on the Tracks is the closest Dylan example, Joni Mitchell’s Blue is her most directly revelatory work and Taylor said it all in one song – Fire and Rain. John Lennon’s Plastic Ono solo album is a primal cry from the heart, Loudon Wainwright is sardonically, almost compulsively, frank - and now, younger singers like Will Oldham and William Fitzsimmons are also Stevens’ fellow travellers.

The real comparisons with Sufjan’s Carrie and Lowell, though, are American confessional poets like Sylvia Plath and Robert Lowell, writing about family, anguish and self-harm. Lowell called his ground-breaking volume, Life Studies – vignettes of his parents, his marriage, his dreads and anxieties described in plain candour ; stark, courageous, sometimes wry - and, like all genuine confrontations with the troubled self : healing and celebratory in their rediscovery of purpose.

Death with Dignity is a remarkable song in that it describes grief as a child might experience it – paradoxically, as a mystery, an impossible finality. It is not self pitying, sentimental or mawkish: “I forgive you mother, I can hear you/And I long to be near you/ But every road leads to an end…Your apparition passes through me in the willows: Five red hens - you’ll never see us again.”

As the musicians conjure a modal web of guitar, piano and pedal steel, digital projections – a flickering slideshow of old family photos, glimpses of the baby Sufjan and his parents - appear in what seem like a series of cathedral windows or a huge illuminated picket fence. Light floods in to the hall, identifying us to the performers as well. This could have been portentous and self-regarding but Stevens judges it perfectly. He is a quiet mystic, modest in manner and able to heft emotional weight. These experiences are about him, but they are also about us, and he astutely reminds us so.

A cluster of songs follow- the regretful Should Have Known Better –“My black shroud… I should’ve wrote a letter/Explaining what I feel” – the vocals are on echo, processed, otherworldly, while Casey Foubert’s electric guitar churns in rhyme with Stephen Moore’s harmonium keyboard chords.

And there is Sufjan, in his signature wacky green trucker hat and a black t-shirt emblazoned with almost luminous silver cross-hatchings. The hall lights are up again. It is like a revival show but it’s not selling any afterlife except the rest of the one we already have.

All of Me Wants All of You – with its memories of Oregon landscapes: “Saw myself on Spencer’s Butte /landscape changed my point of view” - has the band really opening up with a more enveloping sound than the album version. Foubert unleashes a wash of pedal effects , James Mcalister’s percussion grows louder, along with piano and synths, and an extended, trippy, psychedelic jam unfolds, complete with purple haze lighting and the forlorn repetition of “All of me wants all of you”.

The exact sequence from the album is broken with a switch to The Only Thing, the most openly fraught song, it reveals Stevens’ crisis of faith and dread at what he has to contemplate. It is histrionic to say “Should I tear my eyes out now ?” but maybe it is the understatement of the vocal delivery which offsets a sense of excess.

In an age of bombastic self-regard and religious simple-mindedness, for any artist, describing the dark night of the soul is perilous, both personally and aesthetically. Sufjan Stevens, perhaps because he determinedly shies away from talking directly about questions of faith, is better able than most to explore the elusive subject of transcendence.

In this carefully managed set list the inclusion of The Owl and Tanager from All Delighted People is a switch but not a departure from the emotional narrative. The playful refrain between the two birds (a tanager is a generic for a songbird) and the shreds of childhood recollection in the song are beautifully managed with multiple harmonies from Stevens, Dawn Landes and Foubert with the band opening out in a swoon of synthesisers.

Four more key songs follow- Eugene, another mix of Oregon memory and deathbed reality –“What’s the point of singing songs/If they’ll never even hear you” And, the highpoint of the set, Fourth of July, with its plaintive opening piano notes (echoes of Elbow’s Puncture Repair and Fitzsimmons’ The Sparrow and the Crow) its irresistible melody and lambent lyrics – “It was night when you died, my firefly/What could I have said to raise you from the dead ?”

It is a tender song of comfort and harsh truth from mother to son – My little hawk, why do you cry? We’re all gonna die. “The final refrain repeated in ever widening circles as the sweet harmonies turn into a full crescendo with sprays of light and a gathering drumbeat. Again, a moment that could have toppled into bathos, becomes one of affirmation instead.

No Shade in the Shadow of the Cross again questions the central tenets of resurrection and, at last, the title song - Carrie and Lowell, is again accompanied by flickering Super 8 footage of his two families, including his stepfather Lowell. Accompanied on guitar and ukulele , the harmonies between Stevens and Dawn Landes, like much of the album, echo the very best of early Simon and Garfunkel. It is hovering on the edge of icky pop , but always carefully judged, the melody and lyric are triumphantly sublime.

Stevens and his splendid band complete the set with Vesuvius, a free form drumming blast from The Age of Adz, Futile Devices and one last word from Carrie and Lowell, Blue Bucket of Gold - referring to an Oregon story of miners who found gold but didn’t recognise it at the time - and then couldn’t find the site again.

The tune builds from simple piano chords to a full scale repeating finale – “Raise your right hand /tell me you want me in your life “ - with a long (perhaps over long) double spray of white laser light into the auditorium, drawing us towards two portals like a near death experience. It verges on interminable but, of course, like much else in the show its theatrics are intriguing and strangely comforting.

For the encore section, covering another six songs, the mood changes almost completely. The five musicians gather around a single microphone like an old-timey country music show. All play acoustic instruments – and Sufjan gets out his familiar banjo.

The selections are from Michigan and Seven Swans - and they sing Heirloom from All Delighted People. They have Emily Dickinson length titles – All The Trees of the Field Will Clap Their Hands, For the Widows in Paradise, For the Fatherless in Ypsilanti. Stevens adds The Dress looks Nice on You and perhaps as a kind of in-joke, Casimir Pulaski Day, referring to the local public holiday in Chicago commemorating a hero of the American Revolution. It falls on the first Monday in March which would have been the night of our concert – if it hadn’t been a Leap Year.

During the encores Stevens speaks to the audience for the first time, disarmingly telling self-deprecating anecdotes about his father’s belief in Edgar Cayce’s Past Lives and the reincarnation of family pets . He also says he’s been listening to Stevie Wonder’s Songs in the Key of Life and muses ironically whether his show might be called songs in the key of death.

He needn’t have worried. This singular talent has, in a pop concert, tangled with large and elusive questions with intelligence, wit and an open heart. It is a risky venture and he succeeds. I call that a wonder. And these beautifully performed songs are Sufjan Stevens’ life studies.