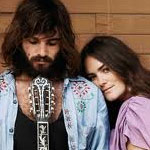 A decidedly younger crowd gathered in front of the main stage for the only performance from Aria award winning sibling act Angus and Julia Stone.  These two have had an incredible 12 months, collecting accolade after accolade a s they travelled the world promoting their latest self-produced album Down the Way.

Headlining opening night of the 2011 Womadelaide festival, they drew the crowd and had all fixated with a phenomenal set featuring a mix of tracks from their two album releases and EPs.  Julia's beautiful vocals were as clear and tender as the album suggests, while her one-handed trumpeting and Angus' masterful guitar and harmonica playing equally impressed.

Fun and personable on stage, the Stone's chatted between songs to the receptive and vocal audience.  Their hit singles Just A Boy and Jet Plane drew screams of anticipation and appreciation.

A beautiful performance from the best indie folk act Australia has produced in along time; they were the perfect act to set the scene for what's to come!