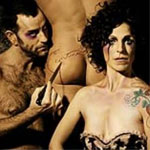 Strut and Fret. The Famous Spiegeltent, 15 Feb to 13 Mar

Cantina is a darkly funny, vintage-inspired circus cabaret show that has gathered significant interest in the lead-up to this years Fringe.

Hyped as The Garden’s “must see” show for 2011, it follows a recent trend of popularity for modern vaudevillian circus-cabaret shows led by La Clique and Smoke & Mirrors.  Polished, professional and incredibly entertaining, these offer a programme that goes above and beyond the standard set of circus acrobatics and trickery.

Managing to fuse coy, sexy, intense and comedic, Cantina delivers on expectations, earning its stripes amongst this class.  Taking it’s inspiration from violence and passion of 1950’s Paris, the cast performs solo and in company to enact the theme through dance, movement, music, acrobatics and contortion.

The show opens with an elevated meeting between lovers, with Chelsea McGuffin (La Clique, Circa) showing that women really can do it better as she walks the tightrope in heels.
Finland’s Henna Kaikula (Cirkus Cirkor) performs a ‘rag doll’ act that will shock and delight.  Her sickening displays of disjointedness had the audience gasping and cringing in disbelief, and its conclusion was met with much relieved laughter.

Mozes (La Clique, Acrobat) captivates the hushed audience with a dark and dangerous aerial swinging performance that is visually powerful.
In the occasional weak point, the drama of the show is overplayed but this is a small criticism in an otherwise well-directed piece.  It is technically and physically challenging, with beautiful choreography and costuming.  The show is backed by a fittingly manic soundtrack of pianola, and music from Nara Demasson (Vulgargrad), who performs ukulele, guitar and vocals.

The cast is talented and experienced; no one artist is just an acrobat, just a strongman, or just a dancer.  Perhaps the only exception to this is contortionist Kaikula, who appears noticeably one-dimensional within the group.  However, she is so exceptionally good at what she does that all is forgiven.

Cantina is a must-see, though comes with a warning for the easily offended - it does contain a moment of full frontal male nudity.
For those not put off by this, note that the show contains a lot of floor work, particularly in the first half, so if you want a clear view of the stage without having to crane your neck or rise from your seat, it’s highly recommended that you arrive early to get a front row position.  Now sit back and enjoy!