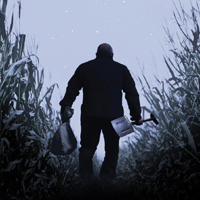 David Mealor, for his directorial debut with State Theatre Company, has decided to tackle an amazing piece of Sam Shepard writing in Buried Child, and has assembled an outstanding cast to take this story to the stage.

Written with a linear narrative but not with a simple story line, the themes of the play, like many of Shepard’s productions, are revealed through visual clues, metaphors and symbolism – with minimal topical exposition, and maximum chatter.

Shepard spends much of the first half (2 acts) developing character, and it is through these character interactions that he makes references to theme and context. What Shepard was really trying to say with Buried Child has often been critically debated. The scripting contains many contradictions, revelations and reversals, which suggest that the particular events surrounding this family are, overall, less important than the ‘big picture’ thematic concerns which a born of their story.

Director, David Mealor writes in his program notes that the play is about the past, the silencing of a terrible secret and the impact which that has over individual, family, and country. Like Shepard’s play, there are too contradictions here; where Mealor states “A pact was made to never mention it again...” his character Dodge reveals “I don’t remember any pact!”

Shepard was trying to evoke a feeling in his audience, using every aspect at his disposal. Combining setting, lighting, physicality and text, he creates a world which feels distant and isolated; established in time but now in complete disarray; which bears a secret that is never revealed. Mealor and his amazing team have picked that up, moulded it into their own and delivered on all fronts.

Set design by Mary Moore remains relatively true to Shepard’s original plot, with the couch, television and lamp the only real indicators of room locality. The imposing stairway disappearing into the proscenium arch leads seemingly to nowhere, its ascension and descension often executed in a cascade of light, as if coming from or rising to heaven. Moore’s set is exceptionally detailed, more so than Shepard’s original vision, but works so effectively with Mark Pennington’s lighting that you are truly transported to the American Midwest farmhouse.

Composition by Quentin Grant heightens the eerie ethereal feeling of the space, and ingeniously connects the characters to their own subtle musical accompaniment. The music is never self-serving, rather perfectly gripping in emotional intensity whether to create tension or release it.

The real work however, has been done in rehearsal and it shows. Mealor’s cast are outstanding, and excepting a few moments of unevenness, have the audience at the edge of their seats for much of the show.

As the father/grandfather aptly named Dodge (and often trying to dodge responsibility for everything) Ron Haddrick is captivating. Often reminiscent of the late Walter Matthau in his vocal quality, Haddrick is the glue which binds this cast together.

As Tilden, the developmentally challenged eldest son, Nicholas Garsden shows he has a real knack for Shepard, giving one of his best performances since True West. Garsden’s presence and focus is second to none.

Playing younger brother Bradley, Patrick Graham really hits his straps by his second entrance. He is frighteningly good in his physical violation of Shelly right before the interval curtain.

Newcomer Hannah Norris plays Shelly, outsider and girlfriend to grandson Vince, with emotional depth and quality. She masters the balance between insecurity and sex so convincingly, that it really reinforces Shepard’s symbolism.
Shelly’s boyfriend and heir to the family estate Vince is played by Tim Overton who does a commendable job – particularly in the second act. Early in the first act it did feel as though he emotionally peeked too soon, and left himself with nowhere to go.

Jacqy Phillips as the matriarch and wife to Dodge, Halie, was a commanding woman with the right amount of vulnerability and Patrick Frost in the role of Father Dewis gave a lovely contrasting characterisation of lightness and grace, not seen by any of the males up to that point.

This production is fantastic, and a standout show for STC in what is shaping up to be a standout season. If you get a chance to see it, listen for the textual contradictions throughout, and see if you can pick up on the clues. This show will leave you with a ‘good’ empty feeling, a space that you will be dying to fill with answers to the many questions it raises.

After all, isn’t that the point of theatre anyway? To make us think…