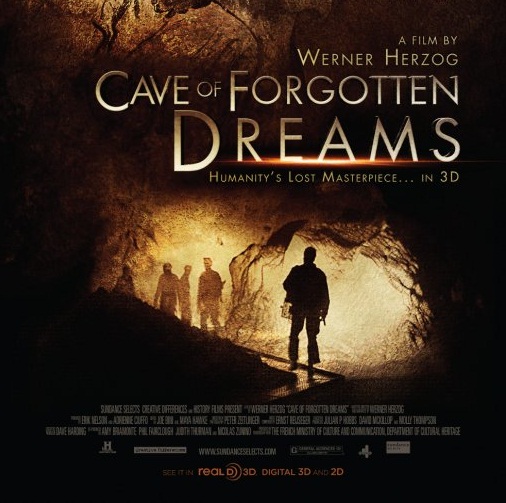 When Pablo Picasso saw images of the cave paintings from Altamira in northern Spain, he reportedly said “we have learned nothing in 12,000 years”.  The Altamira images are such lucid representations of their subjects that they challenged the notion that early humans were primitive beings and forced anthropologists to revaluate what ‘humanness’ means.  Werner Herzog’s documentary Cave of Forgotten Dreams focuses mainly on the paintings in the Chauvet cave in France, which, at approximately 30,000 years old, makes them the oldest paintings known.

The images of horses, bison, cave lions, bears, hyenas and even a panther are so overwhelming beautiful that they are a difficult subject to document using a single approach, so Herzog’s tends to mix various documentary modes.  At times, the film uses the expositional mode when Herzog presents a voice over narration and shows experts in talking head interviews giving opinions about the significance of the paintings and speculating about how they were made.  Alternatively, Herzog sometimes uses an interactive approach as he intervenes (and sometimes simply by interrupting) his subjects in an attempt to get them to elucidate interesting points.  Herzog even shifts to a reflexive mode where he reveals the process he had to go through to make the documentary; we see him handle the lights and catch a remote controlled camera, and hear him detail the restrictions he and his three-person crew had to comply with given the sensitive environment in the cave.  The documentary also features elements from the cinema veritae or ‘direct cinema’ mode, as a lot of the footage inside the cave is hand held, and simply shows the scientists and filmmakers moving within the cramped environment.

The interactive and reflexive aspects of the documentary ultimately encourage the audience to make parallels between the (roughly) 30,000-year-old cave art and the history of cinema (which seems to be Herzog’s real interest in this subject matter).  Herzog subtly implies a unity of experience as over 30,000 years ago, people painted images in the dark recesses of the cave, 30,000 years later Herzog photographed these walls, so that the audience could enter another type of darkened room and see the images mechanically projected onto another type of wall.

The paintings demonstrate that a human desire for image making existed at least 30,000 years ago; the innovation of cinema was the development of machines – the camera and projector – that made it possible to record and reproduce images.  Herzog demonstrates another parallel when he notes the red ochre (a pigment created from minerals rich in iron oxides) used by a person to paint handprints over a rock inside the cave.  This demonstrates that all art history has embedded within it a technological history of the materials, devices, and methods that make art forms possible.

In other ways, the documentary is a bit of a letdown, as it is a hard task for the documentary itself to live up to the qualities of the cave images.  The musical score by cellist Ernst Reijseger is pleasant, but sometimes just feels redundant.  A very moving scene, for example, involves everyone in the cave standing silently in order to experience the cave’s ambient sounds.  During this scene, I thought about chance, the fact that the paintings were preserved so well because of a landslide that sealed the original cave entrance, and the serendipity of the cave explorers that happened to find the new entrance in 1994.  Herzog sadly destroys the potential for fully realised emotional engagement in this scene by introducing the sound of a beating heart; sometimes simply allowing the camera record is the best choice a filmmaker can make.  In this regard, some of the most moving scenes of the film recall the actuality mode of 1890’s cinema; when the camera simply records images of the paintings from a variety of angles, the true power of the paintings is conveyed.

Another poor aspect of the film is the way the motivations of the cave artists are often presented as mystical or simply unknowable; even though there is a significant body of work that attempts to explain the motivations of cave art.  The unity from cave wall to cinema screen is clear, but Herzog seems little interested in the process these artists went through to ‘learn’ how to paint images.

Fascinating research in this field exists, for example the work of South African anthropologist David Lewis-Williams as documented in Inside the Neolithic Mind and in the BBC documentary How Art Made the World.  In these pieces Lewis-Williams proposes that cave paintings are an attempt by early humans to record mental images induced by altered states of consciousness.  These experiences were not simply “dreams”, as Herzog suggests in the title of his film, but rather changes in mental states induced by certain activities.  Lewis-Williams argues that religious rituals, such as repetitious dancing and singing and sensory deprivation, such as staying in the dark and quiet depths of a cave for long periods, can induce trances which may lead to hallucinations that early humans considered a sign of passage into a spirit world.  What the person ‘saw’ during these events was determined by their conscious experiences, which Lewis-Williams argues, tended to be visions of animals that moved with power and grace (even including animals that were extinct when they were painted).  Rather than simply drawing what they saw outside the cave, Lewis-Williams argues that early humans painted their visions that were ‘seen’ (in their minds’) as two-dimensional representations spread onto rocks or cave walls.

Herzog only briefly considers the fascinating issue of what motivated the artists, when one of his interviewees talks about early humans’ belief in the fluidity and permeability of existence.  Unlike contemporary humans, who generally believe in stronger distinctions between life and death, and human and non-human existence, early humans believed in a slight boundary between their existence and that of the animals they co-existed with.  This may explain why some of the cave images (including some not shown at all in the documentary) include the integration of features from animals and humans.

The paintings in the Chauvet cave generally show animals in profile as line drawings.  This demonstrates the astonishing innovation that these artists achieved.  Lines are used to represent edges of the animals, and overlapping lines designate the relative proximity (in depth) of different animals; which shows that these artists had a crude sense of depth and perspective.  It is thus ironic that the film was photographed in 3D, as a major innovation of cave art is the way solid (3D) objects were translated into 2D forms; while the 3D format creates a pseudo stereoscopic effect designed to transcend the ‘limitations’ of the ‘flat’ theatre screen.

In some shots the 3D format reveals how the painters utilised the unevenness of the cave walls to create 3D-like effects of the image popping into relief (Herzog also plausibly notes that the inclusion of additional limbs on some animals seems designed to imply a sense of movement in depth like overlayed cartoon cells).  Often, however, the 3D format either has no effect, because the image is on a section of the cave that has a flat wall, or it is simply distracting, such as during some panning shots when the stereoscopic effect seems to result in a blurry image without a clear vanishing point.  Filmmakers have created exaggerated depth compositions since the late 1930s (most famously the work of cinematographer Gregg Toland) and have forced the perspective of the image by using extremes of lens focal lengths since the mid-1960s.  Skilful filmmakers, like skilful cave painters, don’t need 3D cinematography to exploit depth or to create expressive and beautiful imagery.

In the contemporary era of Photo-shopping, Computer Generated Imagery and the bombardment of visual propaganda in advertising, one can be forgiven for being sceptical about the authenticity of many images.  Herzog has done us a great service by using the technology of contemporary cinema to make the images and ambience of the Chauvet cave easily accessible to anyone who wants to step into a movie theatre or buy a 3D Blu-ray player and 3D TV.  As William Faulkner wrote: “The past is never dead.  It’s not even past”; these images may be from the extremity of our cultural heritage, but the desire for representation – to somehow ‘capture’ and reproduce imagery (both real and imagined) in a form that can be experienced by others – will live on forever, as it is part of what makes us human.

Whether it is someone recording a rant on a webcam and uploading it to YouTube or composing a 3D animation in a computer, the desire for visual representation lives on.  The people who created the Chauvet cave images lived lives that were in many ways very different to ours, but we share with them the same mental capacities that facilitated the innovation of image creation.  The paintings show what we were, and provide clues of what we would innovate thousands of years later; from technologies like magic lantern slides, zoetropes, flicker and comic books, and the cinema itself.  For the imagery of the cave paintings alone, this documentary should be seen.