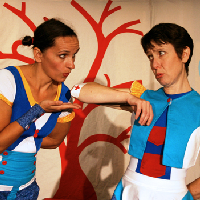 As part of their 2014 season, Pocketfool have brought ‘All Gone’ to the Adelaide Festival Centre. A Melbourne-based company formed by actors Jennifer Andersen and Heidi Weatherald, Pocketfool work with various collaborators to write and perform theatre shows for under-10s.

Presented in Adelaide Festival Centre’s ‘Something for Saturday’ program, this gorgeous show addresses a no-doubt puzzling everyday occurrence for young children - things seem to come and go. Whether it be the food on your plate, the water in the tub or Grandma and Grandpa, things depart as mysteriously as they arrive.

‘All Gone’ is aimed at 2-4 year olds and completely hits the mark. Simple dialog and interaction between the two characters mimics the language of toddlers; the story is communicated through strong movement and one-to-two key word phrases, including the classics ‘more’, ‘bye’, ‘mine’, and of course, ‘all gone!’.

The modest but functional set (Ken Evans), colourful costumes (Amanda Fairbanks) and clever use of props make this visual and funny piece interactive as well. They incorporate a number of elements easily recognised by children - ribbons, socks, balls and musical instruments. The excitement and wonderment on the children’s faces as a giant red balloon was gently thrown over their heads, floating within reach of outstretched arms, was delightful and heart-warming.

Andersen and Weatherald have been working in the industry for over 20 years and clearly have an excellent understanding of how to engage young children. This might sound simple enough, but it’s a feat that is fully appreciated by parents and childcare workers. Factors such as concentration span, comprehension levels, humour and the need for interaction must all be carefully considered. These factors differ radically between age brackets, meaning successfully theatre shows must be tightly targeted.

Pocketfool can be very proud of this wonderful production, and be safe in the knowledge that they have won at least 1.5 new fans.