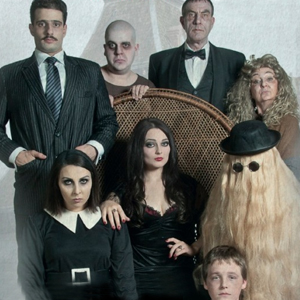 Director, Matt Byrne has once again thrown caution to the wind and mounted a production previously untested on Adelaide audiences. This time it is ‘The Addams Family Musical’, and boy is it a spectacle to behold. With design by Anthony Dal Santo, costume creation by Sue Winston and Renee Brice, and lighting by Ian Barge and Mike Phillips, the show is a visual feast.  Given the audience has to look at it for 2 hours 40 minutes that is a very good thing!

Although the writers were only allowed to base the stage production on the original comic strip and not the well-known television show, all of the usual characters are there – including a brief appearance from Thing.

The lead roles are all solidly cast and there is nary a weak performance on stage. Some players do shine, namely Sophie Hamilton as Wednesday Addams, Emma Bargery as Mortica Addams and Jamie Hornsby as Fester Addams. Hamilton was the perfect all-rounder singing her parts beautifully and delivering a very believable characterisation of a difficult role. Bargery delivered a typically strong performance and played a suitably sexy Mortica.  She sang all her numbers beautifully, though they rarely showcased the extent of her voice musically. Hornsby was the comic scene stealer, and as the omnipresent narrator worked wonderfully both inside the show and when breaking the fourth wall; a truly enjoyable character.

Individually every person on the stage brought something special to this production. Michael Coumi as Gomez Addams certainly looked the part, and had excellent comic timing even if his accent switched between Zorro and The God Father a little. Chris Bussey’s Grandma Addams was outrageous and definitely had some of the best lines of the show - she was wonderful in her role.

Fiona Aitken and James McCluskey-Garcia were the perfect foil to the Addams family with their excessive normality as Alice and Mal Beineke. Aitken was particularly strong as the awkward, repressed wife and McClusky-Garcia strong in both character and voice.

Frank Cwiertniak had the ‘talkative’ part of Lurch and grunted his way through the near 3 hour run barely cracking a smile.  Dylan Richardson looked a wonderful Pugsley and was a strong young actor.

Finally Jonathon Shilling relished his part as Lucas Beineke, the normal young man who has fallen for Wednesday Addams, and together with Hamilton delivered a believable relationship under abnormal strain.

Gordon Combes’ musical direction was solid, but the orchestra was frequently too loud to hear the lyrics clearly. Sound was a bit crackly on this particular night, and the leads could do with a few extra volume notches when singing with the ensemble.

Byrne has produced a wonderful production of a difficult show which would really benefit from a fat red pen. The first act is where it’s at, and really gives the show a solid story line before the interval. If the rights allow editing I would highly recommend that consideration for future productions. In the meantime however, get out and support some local theatre – you should be dying to get there…

When: 2 to 26 July
Where: Arts Theatre
Bookings: mattbyrnemedia.com.au