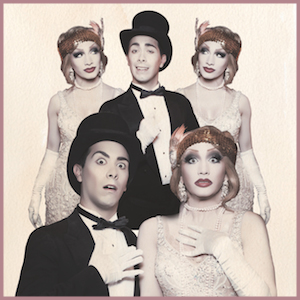 Dr Dan Von Dandy and his gorgeously gaudy wife Kitty Witless are lost in time.  Living in the Roaring Twenties, they were happily touring speak-easies and cabaret bars entertaining audiences with their delightful and original tunes, when disaster struck.  Caught in an untimely avalanche, they were frozen solid.

Recently thawed into the current day by global warming, they have emerged to discover that their best numbers have been unceremoniously usurped by modern musicians, without so much as a nod to their creative genius.  In an effort to set the record straight, Dandy and Witless are now touring the world showcasing a selection of their greatest hits as they were “meant” to be.

Making it’s Australian debut in the Fringe, ‘The Vaudevillians’ is the creative offspring of rapidly-rising drag star Jinkx Monsoon and cabaret performer Major Scales. It’s not-stop ham mixed with swinging versions of familiar songs such as Madonna’s “Music” and DJ Kool’s “Let Me Clear My Throat”.

The true gold in this show is the hilarious and well-executed banter between the pair, who work off each other seamlessly.  The musical numbers are less consistent but get better as the show progresses. The high point is the show's penultimate song, a brilliant performance of 'I Will Survive", which had most of the audience in stitches.

Monsoon and Scales are both incredibly talented. It's clear that they have put a lot of love into crafting the show's story and characters and it translates in a really enjoyable piece of theatre.  It does have its flat points, and could benefit from some direction to tighten up the loose spots but it is, nonetheless, absolutely worth seeing.

When: 14 to 16 Feb
Where: Paradiso Spiegeltent
Bookings: adelaidefringe.com.au