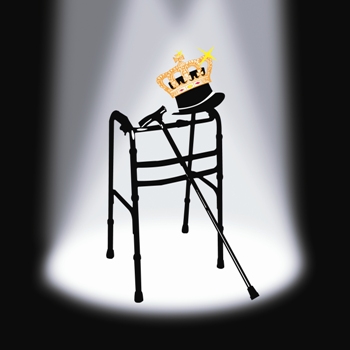 The classes of the fifties and sixties are classier than ever. Their pens are sharper and pith pithier.

The Royal Adelaide University Old Footlighters Club revived the art of university revue in 2006, long, long after they had left uni, and have turned into the cult show of the Adelaide Fringe.

They dare to say this is absolutely their last show.

There's a wrinkly rabble refusing to believe this could be so.
Heavens, they have only just recruited Keith Conlon into the team. He's a fresh old blood.
With Richie Gun, Rob Morrison and Bob Lott, he is able almost to revive the Adelaide University Jazz Band of the 60s - Anna Michael joining him on most acceptable ‘Ain't Misbehavin’' vocals.

There are some top notch skits in this revue, as well as some very odd ones and very lateral ones. There are incisive political skits, silly skits and cry-with-laughter funny ones.

My ribs are still aching from the restaurant scene, ‘What a Choice’.  Oh, and ‘Dual Britannia!’ It's an anthem to the roundabout. High spots are many. Kitty Peake as Gina Mineshaft - divine, and what an ending. Then there's Bob Lott skilfully chanting some complex scansion in ‘Popes I have Known’, a more serious theme. Bob and Kitty pair for ‘Time on our Hands’, the sweetest homage to retirement. Keith Conlon turns up as a political candidate sniping at "Christopher (hear me whine) Pyne" while running on a pronunciation policy. A lovely, quirky piece. The Gentlemen Footlighters line up en masse to deliver ‘The Creed’ - a big male priestly choir chanting the life and times of Tony Abbott. This is a top skit. There are zany moments such as the vegetable orchestra of ‘Fruit Cha Cha’ and unlikely moments such as the uber arty spoof on Pina Bausch choreography. This is a big number and it must have taken very serious rehearsal.

Wayne Anthoney has directed this production and his showbiz skills shine through the discipline and the general neat snappiness of the show.

This lovely, lively, fearless cast also includes John Potter, Margi Butcher and Margy Hill, Tisha Brown and Andy Ligertwood, Michael Johnston and Paul Kolarovich with Jenn Havelberg on choreography, Bill Kay, invisible but indispensable as ever, stage managing. The support team goes on. There is even a band of young musicians alongside these golden oldies.

Perchance, one of the secrets of the Footlighters' riotous success post prime is that, unlike their student selves, they now not only perform the satiric material, they are the material. They send up their own ageing processes - retirement homes, hearing tests, medical visits - a practice, one suspects, which is keeping them young.

When: 15 to 22 Feb
Where: Holden Street Theatres – The Studio
Bookings: adelaidefringe.com.au