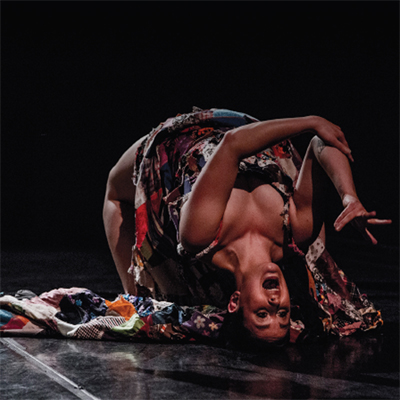 Eliza Sanders is all these things in a sphere of her own invention.

She opens her Holden Street show, a strong young body clad only in black briefs alone upon the black stage. She is entwining arms and legs, forcing her body into challenging contortions, her limbs seeming to be arguing with each other. It is a strange, fluid tussle.

After a while, just as one is wondering where this is going, the most ethereal sounds emerge from the writhing form. A beautiful voice, strong and pure, sings forth. And the body writhes on.

The theatre is plunged into darkness.

Lights return and there she is, dressed in light overalls.

The only set in her black world is a pair of clothes lines strung across the stage with a few colourful pegs. This is immensely effective, albeit mysterious to begin with.

Sanders, directed by her renowned brother Charles, takes her audience upon a wild voyage of sound and movement. She is uncompromisingly lithe. It is dance with acrobatics and yoga. It is pretty much everything a body can do. And it is accompanied sometimes by shrill song, very different from that initial ethereal sound, mostly a mad, manic ongoing patter of stream of consciousness.

Sanders’ movements always are skilled in the nature of one highly trained in dance, mime, maybe a bit of LeCoq.

Her energy is daunting and a bright and sweet face lives atop her gamin body.

There comes a point when she is not alone on the stage. There is a vivid patchwork thing which she adopts as a dance partner and then, oh, and then a wonderland of colour, ingenuity and imagination emerges.

It is quite the surprise and it really should be seen.