The Odes of March 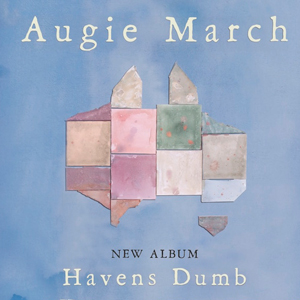 It is several weeks on from the Ides of March, now it’s time for the Odes of March. Augie March, that is - back from a seven year hibernation for a national tour featuring their 2014 album Havens Dumb. Led by the prodigiously talented, singer songwriter Glenn Richards, Augie March appeared on the Australian music scene in 1998 and released their first album Sunset Studies in 2000. Now fifteen years and five albums later, they are here to remind us what an embarrassment of musical riches/Richards they have to offer.

They are a quirky bunch. After an excellent set from the very promising Adelaide trio, Cosmo Thundercat, Richards and the band wander onstage at Her Majesty’s in search of bass player Edmondo Ammendola. There is an awkward delay until his shambling arrival and Richards, never entirely comfortable as the frontman, finally gathers the band, and the three member Arnold Horns, to open with Hobart Obit.

“I tried to care for you the best I could /We mapped it out and reconfigured the old neighbourhood/But time is a bastard , time is a vial of petty sands,/the body’s a basket emptying to the niggardly hands/of Aeon for his array of strung out decay…”

With three-part harmonies crooning around him Glenn Richards unfurls the first of his many densely laden lyrics sung in his melodic pitch perfect vocal, with gently chiming guitar from Adam Donovan, Ammendola’s deep thrumming bass and David Williams anchoring the band with his steadying drumbeat. It is a sweet pop rock sound – echoes of Crowded House and perhaps, in their keening vocals and esoteric lyrics, the hugely under-rated UK band Turin Brakes.

With very few exceptions Augie March songs don’t just jump into the brain pan and stay there. They are intricate, trickling threads of voice and word, chord and beat, there are hooks but they don’t have simple choruses, or the kind of repetitions that become immediately memorable.

Interestingly, in the Havens Dumb songs there are repetitions of line between songs- “Time is a bastard, time is a vial of petty sands ..” from Hobart Obit, reappears in Bastard Time and in the album’s splendid opening songAWOL, regrettably excluded from the Her Majesty’s setlist. A Dog Starved gets a go instead – Donovan’s guitar taking on that sweet rheumatic Gretsch sound George Harrison gave to the world. In fact there is a fetching White Album feeling to the whole song, or perhaps, given Richards’ tempus fugit preoccupations -All Things Must Pass.

Peering down at his setlist, printed in a pygmy font that is too hard to read, Richards, somewhat haltingly, leads into a selection from Moo You Bloody Choir, The Cold Acre, Kiernan Box’s gentle piano intro followed by the swing waltz rhythm of yet another melancholy Augie March treasure – “My heart is a cold acre, my chest is a cold acre…” Then two early compositions, The Good Gardener (On how he fell) and Here Comes The Night, both from Sunset Studies follow, the band in stride with two fine songs, reminders that this band started well and stayed that way.

Glenn Richards is justly proud of Havens Dumb, the album that brought the band back together. Gathered over several years they recorded 30 songs, the musicians living in different parts of the country emailing each other their overdubs as the project progressed. We get three more of the new songs –Bastard Time, Villa Adriana – inspired by Richards’ long-awaited first trip to Italy- and the pungent Definitive History.

Unfortunately the lucid rage of the lyrics is buried under a surfeit of sound. Kieran Box unleashes a loud grating sample of a violin chord which starts to sound like an unattended car alarm, with the Arnold Horns blasting away and the rest of the band competing for attention. More’s the pity that the refrain is lost in transmission – ”O one for the mother, one for the dad/One for the treasurer, one for the plasma screen and don’t forget/ the developers dream,/ a plot to bury them all at the edge of the sprawl-/ Definitive history.”

The early classic There is No Such a Place reminds us that there are few Australian songwriters who can write such plangent melody. This is an amalgam of Paul Simon, Don McLean’s American Pie and Vincent, or more recently the Finn brothers , Elliott Smith and Elbow. But, as always, Augie March sound like a lot of musicians and none of them. They are unique in the best way, because they evoke so much other music that stands in the wings watching them appear – and, as their song reminds us - disappear.

The set concludes with the full-tilt galloping tempo of This Train Will be Taking No Passengers and, of course, an encore featuring One Crowded Hour. It is their signature hit, and yet another wistful meditation on the theme of time, and past love, featuring yet another gnomic Glenn Richards question and response -“what is this six stringed instrument but an adolescent loom ? And one crowded hour would lead to my wreck and ruin.”

Concluding with the downbeat, mildly querulous Never Been Sad, Richards and his staunch, enduring band wind down the show. It has been one of fits and starts, distractedly re-tuning instruments, gazing into the audience, bemused by the lighting blackouts, mulling over Charlie Brown meaning of life questions. As an inner sigh from Glenn Richards becomes accidentally audible, he disarmingly asks- “Am I really tired, or really old?”

No slick patter from Augie March, no smoothly engineered show, none of the easy complacency befitting a veteran band who after seven years of self-imposed exile have returned with an album as good as any produced in this desolate period in Australian music. Instead they played fifteen or so songs of beauty and tangled feeling. It was one memorable hour and a half, ramshackle, often musically exquisite and a reminder that Augie March are a great Australian band. “Thanks very much folks”, Richards diffidently concludes, “that’s us.” And a fine thing they are too. Let’s hope, for all our sakes, that there will be a next time.