Hans - If You Don’t Love Me, Leave 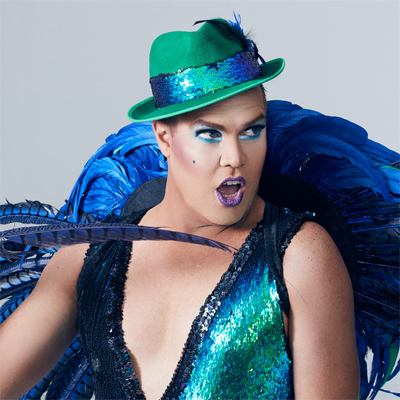 The queues to see Hans aka Matt Gilbertson in Gluttony are quite the place to be for the Fringe. Since his shows are at the early slot of 6.30 this year, audiences fall into line at about 6, complete with wine and beer and nibbles. Outriders trot off to bring back additional supplies if the drinks have gone down too fast. Everyone chums up and, it turns out, few are seeing Hans for the first time. The man has a hard-core Adelaide following.

It’s not surprising, of course.

He gives them their money’s worth. Year by year his shows have grown slicker and more expertly honed.

Needless to say, this year, back from triumphs in the UK, he is better than ever; his voice, his moves, his pace, all have been refined.

This is his great ‘Australia’s Flair’ tribute show. Hans is one of us, as dual-citizened and Aussie as Barossa mettwurst. “Come and see the real thing,” he sings draped in a piece of green and gold kitsch.

With saxophone soaring, the Ungrateful Bastards play, the downlights splay and the Lucky Bitches kick up their choreographed heels with high-octane energy. They need that energy to keep up with Hans who is in top condition and exuding a power of foot-stompin' vigour.

Prancing, dancing and Hansing. Hans picks his targets from the audience. "Are you old enough?” he sings and picks Kel with the walking stick and straw hat who, he reckons, is clearly out from the retirement home. Kel’s an old Hans fan and he’s right into any mischief Hans can throw his way. Perhaps less so Patrick or Torsten the genuine Germans from Kent Town. Hans milks their bemusement with glee.

From his Southern Cross sequinned outfit and into his Aussie bush bling complete with perplexed-looking toy kookaburra on his shoulders and a cling of weeny koalas on the neckline, Hans powers through the Australian song book and some nice, sizzling political satire.

There’s a burst of spectacular tap dancing, a whirling Flight of the Bumblebees on the keyboard, some rousing accordion and an aerial stunt which rather takes the breath away. Costume changes, blinding bling, some rowdy rock; Hans rounds off the show with the Angels’ great Aussie anthem and the audience replies in traditional loving invective.

The 6.30 timeslot might be a bit early for some of the Hans content, but whatever time of day, his people will find him and adore him. Again. And rightly so. He’s our showbiz treasure.

Where: Gluttony, The Octagon