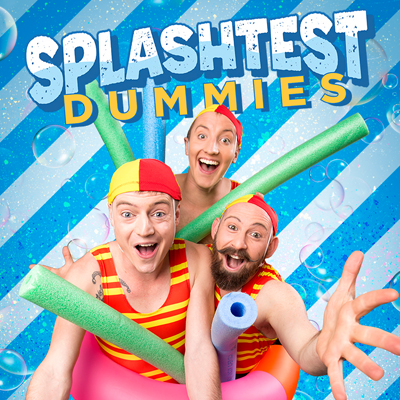 The Trash Test Dummies are back!  Circus trio Jamie Bretman, Jack Coleman and Simon Wright created their original children's comedy act in 2013 and have been touring nationally and internationally ever since.

Their latest show is a twist on the trash-themed original, which scored Best Children's Presentation at the 2015 Adelaide Fringe Festival.  It features an array of water-themed skits: Bay Watch-inspired life guards, swimming cap capers, synchronised splashing, and a somewhat drawn-out, but thankfully PC, shower scene.  The set overflows with slap stick comedy and circus theatrics.

Your favourite dummy will change throughout the show as they show off their many skills.  All three are accomplished performers and well-versed in how to make kids laugh.  Wright is a super strongman and a master of the unicycle, Coleman is the acrobatic wonder, whilst Bretman impresses with comic timing and his finesse with the hoops.

This show is perfect for primary school aged children; the non-stop physical theatre slows somewhat mid-show and may lose younger audience members until the pace picks back up.  Despite this, it is a wonderfully fun and entertaining hour of laughs.

Whether you are looking to dive into the festival head first or wade in at the shallow end, give this splash-tastic show a go!

Where: Corona Theatre, The Garden of Unearthly Delights