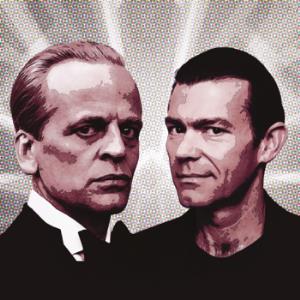 The aptly titled 'Kinski and I' is a largely solo work from writer and performer CJ Johnson, with direction from Michael Pigott.

An award winner at the 2014 Sydney Fringe, the piece is inspired by Klaus Kinski's 1988 auto-biography 'All I Need is Love'. In the book's original form, it provides an uncensored account of a man plagued by a life-long sexual addiction. Though the veracity of the more extreme content has been challenged, there is little doubt that Kinski survived a difficult childhood to become one of the most celebrated and notorious actors of his generation.

Found under the generic category of 'theatre’ in the Adelaide Fringe guide, it is worth noting that the non-traditional performance is more accurately described as platform theatre. Delivered as a narrative monologue it draws entirely from the actor's auto-biography, with Johnson alone on stage playing the character of Kinski. Reading from a tablet device strapped to a stand, Johnson only looks up periodically to meet the audience's gaze. Occasionally, Johnson moves out of character and to stage right providing his own reflections on Kinski and the events of his life.

In a supporting role, Jess Bush is offstage but features via video as Kinski's eldest daughter, Pola. Also reading extracts, her dialog is taken from Pola's own 2013 autobiography in which she details the sexual abuse suffered at the hands of her father.

In a testament to Johnson's talent and his grasp of the character, you are soon immersed in the man and suddenly, the bare stage feels much less so. A video scape of Kinski's most iconic work plays behind Johnson cleverly connecting the audience with the real Kinski and his most transformative film characters.

The language and content are shocking and confronting. Kinski's insatiable and perverted sexual appetite is described in explicit detail, but the sheer volume of smut and its constant presence in his life seems more psychotic than pornographic. You are drawn into his psychosis, feeling both intrigue and revulsion at the brilliance of the actor and the simultaneous addiction that destroys his life and the

lives of his loved ones.

Johnson is clearly a fan of Kinski's body of work, and you can’t help but imagine his own internal conflict in discovering the actor's sordid personal history. It draws parallels with the seemingly unending list of well-regarded actors now being publically accused of sexual crimes against minors. The mix of adoration for their talent and disgust for their heinous acts presents a challenge to us all.

This piece is not pretty and definitely not for the easily offended, but it is a performance that is worth checking out.

Where: Holden Street Theatres - The Studio