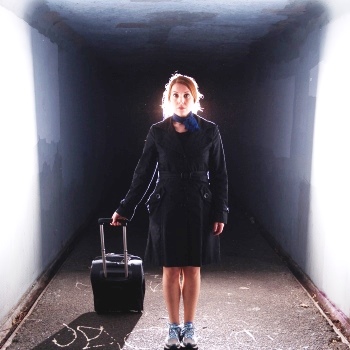 We sit on uncomfortable chairs lined up along two walls facing each other.

The lights go out. It's pitch black. Silent.

Far from sensory deprivation, one becomes highly aware of the proximity of the people sitting beside one.

Finally, a dim light reveals a woman with a soft voice. She begins a stream of consciousness.

For the next hour, we meet her over and over again, emerging from bursts of blackout and torrents of sound.

She is an air stewardess. She runs us through the on-board routines. “Do up your seatbelt... In the unlikely event of an accident...”

But interspersed with the humdrum of work and behind the toothy smile she is dealing with a stark fear. She believes she has a stalker, a man with eyes the colour of ash. He is never far away, always trying to get closer. She maintains the air crew facade but her lipstick smile is a mask.

Bright light falls upon her as she gives safety instructions. It snaps to grey and we dip into the zone of her inner fear.

Hannah Norris makes these abrupt transitions with the precision and effectiveness of the professional thespian that she is.

Duncan Graham may have written the show, but it is Norris who must make the audience commit to it. She is sole performer in the black room with its two aircraft runners of safety lights. Audience feet must be kept behind these lights, especially when they're out for this is the passage along which Norris moves from scene to scene. She does it swiftly and silently in the blackouts, emerging here under a pin light and there under a spotlight, always in another world.

Even in this intimate space, she asserts a strong fourth wall.  She walks down the aisle between her "passengers" but we are silent witnesses in the dark. "Chicken or beef?" she purrs.

For, there is another crucial player in this strange, experimental work. It's the lighting designer, Sam Hopkins. This play in the dark is all about light. It is about the darkness within versus the person we put forward to the world. This is a play which pokes its action out of the darkness, weaves its message in and out of the soundscape and lighting. The sound is a din in the head.

The audience must determine if the woman's stalker is real or a nightmare.

Norris's performance is superb. Her disconcerting inhalation of air becomes yet another of the tools of this unusual drama - startling gasps growing in scale. It is highly effective and will linger in the mind's ear as the most vivid impression of the work.

‘Cut’ is one of those "experiential" theatre pieces which showcase talents and off-mainstream ideas.

This is what a Fringe is all about.

Where: Holden Street Theatres - The Manse