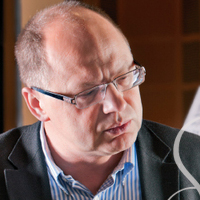 Last night the ASO and Maestro Arvo Volmer reached the conclusion of its presentation of the full cycle of the Mahler symphonies.  No mean feat.

It has been a remarkable eight year journey that began in 2006 (and again in 2011) with Symphony No 5 - my personal favourite.  Contemplate the exquisitely beautiful Adagietto that was so evocatively used in Visconti’s 1971 film ‘Death in Venice’ starring Dirk Bogarde, and that glorious movement puts the fifth at the top of the list for me.

The cycle probably reached its zenith at the 2010 Adelaide Festival of the Arts with a spectacular performance of Symphony No 8.  Who can forget that night in March when Volmer led the Adelaide Symphony Orchestra, the Tasmanian Symphony Orchestra, eight soloists and around 500 choristers in the so-called Symphony of a Thousand.  (Unfortunately it had to be staged in the Entertainment Centre – Adelaide doesn’t have a concert venue anywhere else big enough – a grizzle for another time.)

But last night was all about the Symphony No 9 in D, his last completed symphony.

Like most of Mahler’s symphonies it is long and usually plays around 75 to 90 minutes depending on the conductor’s interpretation.  This is a fascinating aspect of Mahler’s symphonies; there is so much debate around how fast they should be played.  The confusion is in part derived from Mahler’s habit of frequently reviewing his scores and changing his mind, his descriptive but not always helpful tempo markings, and that he would often contradict all of this and take a different approach when he took the baton himself and conducted his own works! I didn’t have a stop watch on Volmer and the ASO last night but I sensed their performance came in a little on the fast side - not my preference.

The Ninth was written during an especially difficult time in Mahler’s life when he learned that he himself was desperately ill with a heart condition and he was grieving the loss of a daughter.  The music is understandably steeped in the deepest and darkest thoughts of death.  It thumbs its nose at the pleasantries of life and mocks them. There is no humour.  It goes beyond melancholy.  It is heartbreaking and it is almost cruel.

Yet, the Ninth can be none of these things – it all depends on what the listener takes to their experience of listening to the work.  Mahler is like that.  One can forget that one is actually listening to music and instead be lured away into private thoughts, reminiscences and musings that are triggered by various musical phrases and motifs.  The ‘falling interval of a second’ that is introduced in the first movement and frequently repeated throughout the symphony is so simple but so beautifully orchestrated.  It takes on the stratus of a Wagnerian leitmotif and takes you to all manner of different places in your mind when you hear it.

The path one is led down somewhat depends on the conductor. Volmer chose to reconfigure the positioning of the orchestra: the second violins were positioned to his right, rather than being grouped with the firsts to his left; the violas and cellos were located more to the centre; the brass was spread out at the rear.  The effect was to ‘homogenise’ the overall sound and create more of a general wash rather than tight enclaves.  This mostly worked but may have tended to make the overall soundscape more ‘comfortable’ than it should have been, especially in the folk tunes in the second movement and the ‘rondo-burleske’ of the third.  The individual character and sense of identity of each section of the orchestra and of the individual players need to be allowed to surface in the Ninth, probably more so than in any of Mahler’s other symphonies.  It is powerful when stark contrasts are clear and confronting.

It all felt a little bit too safe, but it was nevertheless an accomplished performance.

Violist Imants Larsens again shone.  My appreciation for his musicality increases with every performance.  His body language gave every indication that he was fully centred with the music, as were the other string leaders who were closely grouped in a tight semi-circle around Volmer. Cameron Malouf (Trombone) and Sydney Braunfeld (Horn) have never played better.  Matt Dempsey (Trumpet) was authoritative. David Schilling (Bass) and his team conquered the rondo-burleske.  Suzanne Handel (Harp) did the work of two and made an indelible mark.  Natsuko Yoshimoto (Concertmaster) was again superb.

It is an astonishing piece of music and it has been a rare privilege to experience the full cycle with one orchestra and one conductor.