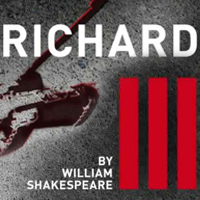 The Little Theatre lobby was sparsely but thoughtfully decorated with red and white roses as humble and multi-tasking director Megan Dansie took tickets at the door.  The action in Shakespeare's Richard III is set during the final years of the drawn-out War of the Roses between the houses of Lancaster and York.  Someone's set design (the programme doesn't bother to mention who) does not harken back to the late 1400s but to modern times when men are armed with computers and lugers, and big brother gets a mention on the graffitied walls of something like an underpass.

The play begins with possibly the most famous opening line in Shakespeare - "Now is the winter of our discontent..."  Gloucester (Later Richard III) declares war on the family to win the crown.  Bart Csorba combines his CPA training and doctorate study in politics into a formidable Richard III.  Looking dapper in luxurious black with a matching leather sling for Richard's withered limb, Csorba plays a calculating and criminally intelligent Richard with the con man's understanding of a person's weakness.  You can see in his eyes he plays people.  The cast is large and the skill level uneven, but there are some memorable moments.  Richard's salacious and nearly slobbering request for Elizabeth's daughter, played against Rachel Burfield, conjured fantasies of a threesome.  Gary George gave his usual stirring and stress-filled rendition with clear enunciation, which contributed to the overall clarity of this production.  Céline O'Leary presented a dignity that comes with years of professional experience.  However, none in the cast, and especially the women, plumbed the depths of grief and pain necessary for empathy.

Megan Dansie moved her players with speed between the scenes and paused them to savour the right moments.  The Battle of Bosworth was an odd affair with nobody on stage for most of it and people creeping out only when it was safe to do so.  The fight between Richard and Richmond (Samuel Rogers) was startling and visceral.  Richard Parkhill's lighting and Tim Allan's soundscape was broody and modern and reminiscent of games.  Costumes ranged from really fantastic, like for Csorba and O'Leary to what's required, like battle fatigues and hoodies - I'm sure it was a big job assembling them.

The real Richard III was disinterred from beneath a car park in Leicester in 2012.  He was likely slain during the Battle of Bosworth - which took place nearby - stripped, mutilated, put on temporary display, and hastily buried when the smell got too bad.  If you have the slightest interest in English history and would appreciate a story clearly conveyed, you ought to visit the Little Theatre.

When: 3 to 17 Aug
Where: The Little Theatre
Bookings: trybooking.com