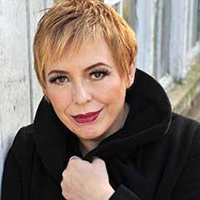 Barb Jungr’s latest Cabaret Festival show, Stockport to Memphis, is also the title of her latest (eighteenth !) record album and features a mix of contemporary classics and her own compositions. It is a Look Back in Jungr, perhaps.

The daughter of European émigré parents, Jungr was born in Rochdale in Lancashire and grew up in Stockport, a town ten miles south of Manchester. In a varied and successful career she has made it from busking in London’s Portobello Road to alternative theatre and the Edinburgh Fringe to her present eminence as a chanteuse on the cabaret club circuit.

Some of her more recent success has resulted from Every Grain of Sand, her 2002 tribute album of Bob Dylan songs. She has since followed that with Just Like a Woman, a Nina Simone tribute from 2008, and in 2011 another Dylan compilation - Man in the Long Black Coat.

On stage at the Dunstan Playhouse, Barb Jungr, dressed in Bohemian black, opens proceedings with a snappy version of Leonard Cohen’s ‘Everybody Knows’. It is not as fast-paced as her jittery Gala version from a couple of nights before, but it is still too brisk for its own good. Cohen’s own recent versions have been perfect studies in the understated sardonic and Jungr’s over-enunciated, broadly gesticulated reading, while lively, leaves little of the world- weary wit in this very timely song.

Following with two recent compositions of her own – ‘Sunset to Break Your Heart’ and ‘Till My Broken Heart Begins to Mend’ – both expertly phrased and soulfully sung, Jungr reveals what is inevitably going to be an unresolved divide between her own capable, but less memorable, song-making and the startling renditions of well-known material she is also showcasing. It is immediately evident with her near- perfect reading of Joni Mitchell’s ‘River’, a version that finds hidden depths even its writer never knew existed. Musical Director, Simon Wallace’s peerless piano phrasing and Jungr’s assured vocals make this a highlight of the set.

Other revelations follow in quick succession. The melancholy gospel tinges of Hank Williams’ ‘Lost in the River’ also display Jungr and Wallace’s expert control of nuance and mood. Then, after a funny reminiscence of the spotty, feral young mods of her teen years, Jungr takes Rod Argent’s Zombies hit, ‘She’s Not There’ and with a shift in gender perspective, re-engineers it into the upbeat, but mordantly reflective, ‘He’s Not There’.

Taking Neil Young’s well-known, much loved, ‘Old Man’ and turning it into a hymn to acceptance is yet another revelation in this dream set-list. Then, Tom Waits’s apocalyptic ‘Way Down in the Hole’ (theme song for The Wire) is deconstructed into a slow blues, garnished with another of Jungr’s splendid harmonica solos. When, finally, we get a Dylan song, it too is a surprise. ‘Lay Lady Lay’, Bob’s ultimate seduction song, is no longer - as Jungr observes - a macho conquest, but a song of experience hard-won; the singer in command and the pianist in perfect unison.

‘From Stockport to Memphis’, a belter written by Jungr, not only charts her progress as a transatlantic ballad and blues diva, but closes the set. Again it falls short of the excellence of the cover versions – so it is only fitting that the encore goes to a Sam Cooke classic : ‘Change is Gonna Come’. It is a powerful anthem of hope, peerlessly delivered by both Jungr and Wallace. And yes, many things in this world need to change, but not Barb Jungr’s gift for breathing new life into the music and poetry of late 20th century popular song.

When: 9 and 10 Jun
Where: Dunstan Playhouse
Bookings: Closed