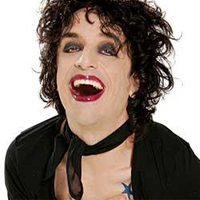 “Everybody wants to touch me”, he sang and with that the Paul Capsis Revue got underway.  For the next seventy minutes we witnessed an iconic performer steadily whip himself into a cabaret frenzy that left the capacity audience on its feet clapping, cheering and pleading for more.

In some ways Capsis comes across as a vocal impersonator, but this is to do the man a considerable disservice.  He has a commanding understanding of the songs he sings, and of the performers who made them famous, and with this he almost channels the likes of Shirley Bassey, Annie Lennox, Janis Joplin, Patti Smith, Joe Cocker, David Bowie and The Beatles.  But he does it his way.  He is so comfortable with his material that he mischievously and surreptitiously changes the occasional word (‘piss me a river’) without missing a beat and sometimes you are not completely certain that that wasn’t the way it was actually written.  He belted out a diverse selection of rock, pop, blues (sort of) and Weimar-infused ballads.  It’s all good fun, and it’s so very stylish.

Dressed (initially) in a pearly white and oh-so-shiny sateen suit with copious and heavily coiffured hair, Capsis variously stood at the microphone and gently swayed around it or strutted his stuff around the stage coquettishly interacting with the excellent four piece band expertly led by pianist-arranger Andrew Patterson.

It took Capsis several numbers to hit his straps, but once he was warmed up and had taken stock of the audience – which ranged from the young and hip arms-above-your-head-wavers to those who were old enough to be their grandparents – he became magnetic and demanded your full attention.  Of course you gave it.

Only two more performances.  Don’t miss it, and it may be the only chance you have of actually treading the boards of the Adelaide Festival Centre stage itself!