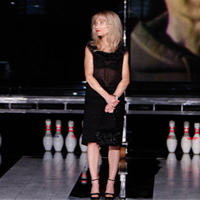 Based on A Streetcar Named Desire by Tennessee Williams. Festival Theatre. 14 Mar 2012

The origin of the piece is the 1947 play 'A Streetcar Named Desire'.  Written by American playwright Tennessee Williams, it received much acclaim in its time, winning the 1948 Pulitzer Prize for Drama and enjoying successful runs on Broadway and in London with the likes of Marlon Brando and Vivian Leigh respectively.

The play has since been re-staged by numerous companies and directors with mixed success, though more recent attempts, such as that by the Sydney Theatre Company in 2009, were well received.

Enter iconic avant garde director, Krzysztof Warlikowski.  In 2010, Warlikowski heavily re-interpreted the piece as "Un Tramway (A Streetcar)", a version for the harsh new modern era. Dragging it into the twentieth century (kicking and screaming, some may say) he famously introduced his actors’ own experiences into the piece to achieve a more personal result.

His new twist on this much loved story copped heavy criticism and divided Paris on its February debut at the Odéon-Théâtre de l'Europe.  While receiving some commendation, most had only criticism.  As put by Le Monde writer Fabienne Darge "You leave this Tramway asking yourself: 'What was the point? What was the point of this completely futile stylistic exercise?".

In a coup for Adelaideans, this controversial piece is featured exclusively in the Adelaide Festival as an Australia premiere. So what is all the fuss about?

The story itself has not changed.  Blanche Duboir arrives at her sister's apartment, in need of a place to stay after the family home, Belle Reve, has been lost as a result of financial woes.  Stella, completely dominated by her alpha-male husband Stanley, takes her sister in but struggles between wanting to help her, despising her mental illness and desperately trying to appease the abusive Stanley.

Despite this, the piece will challenge those with any affection for the original.  Upon a well-designed, but cold and unforgiving set, we are presented with a set of characters that match only in name and sentiment.  This time round, they are much harder, colder and their troubled existences are presented with indifference to audience sensitivities or sentimentalities.

Given that the performance is in French, one is inclined towards imagining a French setting however unlike the original, which is firmly set in America's South, this version is largely location neutral.  It could be any dysfunctional family in any dysfunctional setting.

The original play was strongly themed on the culture clash between the upper-class Blanche and working class Stanley.  This is much less present in Warlikowski's version, though perhaps hinted at by the inclusion of a rather out-of-place live performance of Pulp's brit-pop classic 'Common People'. In the latter, the interaction between these characters is much more a battle of wills based on Blanche's hatred for Stanley's treatment of her sister, and Stanley's disdain for her madness and her interference in his and Stella's marriage.

From the outset, Blanche Deboir's unstable mental condition is laid bare and almost becomes the play's main character; there is no subtlety to her fragility. Isabelle Hupper plays out Blanche's worsening psychosis with authenticity, but fails to achieve a connection with the audience. This can be said for all of the characters; each is portrayed with deliberate, dissociative coldness.

The violence and abuse that underlies Stella and Stanley's relationship is less implied and more in-your-face, with domestic and sexual abuse played out on stage. The hopelessness of the power struggle between Blanche and Stanley, and its impact on her decline into madness is horribly clear.

Warlikowski's musical interludes, including previously mentioned live performance of 'Common People', were puzzling to say the least.  Their inclusion held only vague reference to their position in the piece, and recognising even this required you to be familiar with the song.

While the performance itself held much merit, it was most unfortunate for the Adelaide audience on this night that unless you spoke fluent French, you were unlikely to see most of it. The subtitles were displayed high above the set and each line appeared for mere seconds, meaning that you had to fully focus on this screen and read extremely quickly to keep up with the dialog.  It left precious little opportunity to look down and take in the action on stage.

The lines were often out of sync with the actors, and at various points there appeared to be technical issues, as there were either no subtitles at all, or they were flashed up at such speed that you had no hope of reading them.  The frustration this caused was compounded in the final scene by the fact that the characters seemed to inexplicably change hair style and colour (perhaps I missed the reasoning while I was busy trying to keep up with the subtitles?), causing momentary confusion as to their identity.

All in all, A Streetcar is an interesting piece of theatre.  One can certainly understand criticisms that question it’s worth and overly stylistic nature, but there are elements to be enjoyed.

A warning if you plan to see it - go prepared.  Brush up on your speed reading, don’t forget your glasses. Go to the toilet before you are seated (2.5 hours, no interval) and be ready to be challenged.

When: 16 to 18 Mar
Where: Festival Theatre
Bookings: www.adelaidefestival.com.au