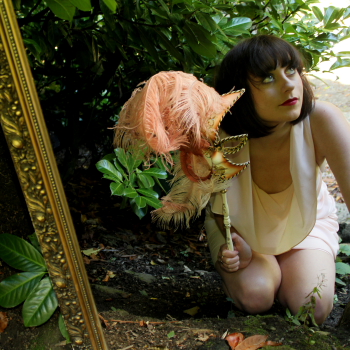 Early success is a tough gig.  Sure, the high is amazing - who doesn't like being told "hey, you're awesome!".  But then there's the come-back show.  You know, the one with all the expectation.  Suddenly you face that transfixing dilemma:  what if it's a flop?  No one wants to be a one-hit wonder.  But you have to do SOMETHING, they're all waiting - baited breath, brimming with anticipation.  Oh the calamity!

Neck deep in the sticky centre of this very issue, Damsel Sophie Walsh Harrington set about making the follow-up to a hugely successful 2011 in which her debut show, The Damsel in Shining Armour, won ‘Best Cabaret Adelaide Fringe’ and received rave reviews wherever it went.

In a clever twist, she has returned with a show that addresses the issue head-on.  Hot charts Harrington's soul-searching quest to create genius amongst the drudgery of everyday life in suburban Yorkshire. So many ideas, but which is ‘The One’? Could she even do cabaret again? Perhaps straight theatre will reveal the true depths of the artistic genius within...  Or not.

This very funny production clearly shows the girl still has it.  Featuring just a few musical numbers, it focuses on a set of wonderfully absurd and disjointed tales of Harrington's misguided escapades in the search for artistic nirvana.

Oh, and loads of dangerously hilarious audience interaction.  Her extensive use of crowd members as spontaneous characters in the piece is recklessly gutsy.  Luckily, on the night of this performance it worked superbly, but one could also imagine it going so very, very wrong!

For this and many reasons, Harrington is an incredibly brave performer. She lays bare much of herself onstage without the slightest hint of artifice or self-consciousness.  Possessing perfect comedic timing, a talent for writing and a gorgeous voice, she’ll struggle to go wrong.

So get on it! This highly enjoyable show should be on your list of "must-see" before the Fringe winds up.

When: 14 to 17 Mar
Where: La Bohème
Bookings: www.adelaidefringe.com.au