The Ukulele Orchestra of Great Britain 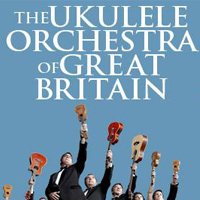 Delightfully droll with some impressively sophisticated musical tricks up their sleeves, this rag tag bunch of musicians represent everything that’s good about the uke and the UK.

It’s about time they came to Australia too – the orchestra have been together for some 27 years, and they’ve surprisingly never graced our shores before.

Or maybe not so surprisingly; 10 years ago the ukulele was a relatively obscure instrument compared to the craze that’s sweeping the globe today, so one can imagine they may have struggled to fill the Canberra Theatre back then like the show did so spectacularly on Saturday night.

With the orchestra members dressed dapperly in their penguin suits and little black dresses, they started off the show by breaking the ice with a bit of British banter and then proceeded to warm up with the ultimate ukulele anthem, ‘The Mighty Ukulele Song’ - logically followed by Motorhead’s ‘Silver Machine’.

Although this was entertaining enough, the lack of any other visual stimuli made the experience feel a little barren at first. The novelty of a bunch of ukulele cover songs would have lost it’s appeal quite swiftly had they not upped the ante and inserted the gimmicks at this point – starting with a Devonshire tea-version of the Sex Pistol’s Anarchy in the UK(ulele).

After showcasing some beautiful vocal and musical harmonies in David Bowie’s ‘Life on Mars’, and a doing a version of Eric Clapton’s ‘They’re Red Hot’ on a wee baby ukulele, the orchestra slipped into some less engaging numbers (with admittedly cheesy segues) before reeling the crowd back in with a sea shanty – of The Who’s ‘Pinball Wizard’, which seemed to go down a treat with the demographic.

The second act began with a slow build up to The Good, the Bad and the Ugly theme song, followed by a version of Ian Dury’s Sex and Drugs and Rock and Roll – or rather, Cakes and Pies and Sausage Rolls – but what was most charming about the second half was the camaraderie filling the theatre during the audience participation spot.

When the orchestra asked the ukulele players to identify themselves, a sea of them were raised in the air like a salute of solidarity, and together they fittingly proceeded to play Beethoven’s Ode to Joy. And what a joy it was.

If their extraordinary music and vocals weren’t enough, the orchestra raised the bar even further with the amazing whistling stylings of Jonty Bankes. And, then after a cover of Talking Head’s ‘Psycho Killer’, what started off as The Rolling Stone’s ‘Satisfaction’ became a challenge to see how many people they could get playing different songs on a single ukulele at the same time: I lost count, but they managed to make it work effortlessly.

Perhaps the biggest crowd pleaser of the night, however, was the hilarious finale of Nirvana’s ‘Smells like Teen Spirit’, complete with head banging and wigging out rock-star style - the diminutive stature of their instruments making the whole scene delightfully absurd.

Of course an encore was inevitable, and we were treated to a swing-style ‘Wuthering Heights’, the eighties classic by Kate Bush which was so far out of context it perceptively had the crowd in stitches.

But, just as it should be, they saved the very best for last: starting with a base of classical guitar, all eight members of the orchestra slowly integrated a different song into the melange until it became one massive, eclectic, perfectly harmonised creation; it was like watching acrobats at the circus balancing one on top of each other to create an intricate formation, and it was totally awe inspiring.

The truth is, even though this show is tongue in cheek and done in jest, these musicians/singers are so incredibly accomplished. There is an immense array of artistic expertise and experience in this self confessed bunch of “misfits and rejects from other bands”.

Although the ukulele is not an instrument that lends itself to being uppity, it was so very refreshing that the performers refused to take themselves even slightly seriously despite their immense collective talent.

This show is simply good old fashioned fun, with a healthy dose of unrelenting British humour and a stockpile of ukulele fever – do try and catch it!