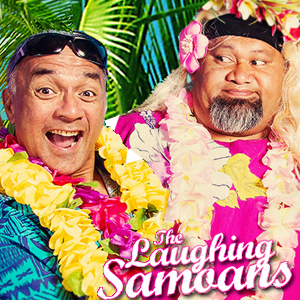 With such a massive saturation of American culture throughout Australia, the prolific amount of U.S. media content not only drowns out homegrown talent, but also that of our rather entertaining island neighbours. This phenomenon is evident in the fact that, despite establishing themselves as a comic duo some 13 years ago, I have never had the pleasure of watching The Laughing Samoans until now.

However, just like Australia’s Gina Riley and Jane Turner with their wildly popular Kath and Kim characters, Samoan raised and New Zealand-based Eteuati Ete and Tofiga Fepulea’I have done a sterling job of celebrating their unique culture and carving out a space for it on the otherwise rather homogenous world comedy stage.

Widespread recognition aside, it is quite clear The Laughing Samoans are also a source of great pride for their fellow Polynesians, with Canberra’s Pacific Islander community out in force this night to show their impressively strong support at The Street Theatre.

Never before have I seen such enthusiastic resonance with a crowd, with the words, “It’s so true!”, being exclaimed frequently between fits of roaring laughter. And while some jokes may go over the head of the non-Islanders during the show, the experience is nothing if not a fascinating and valuable insight into many aspects of their culture.

While the subject matter of Island Time is contemporary, what’s really great about this show is that it revives a time before families were distracted by the internet and other technologies, where the gifted yarner would entertain everyone for kicks and giggles on a Saturday night. Telling a good joke or story used to an artform, and over the years this tradition seems to have been lost, much to the detriment of social gatherings everywhere.

Another reason for Ete and Fepulea’I’s ‘good old days’ appeal is that their Islander-infused schtick is very much the classic Double Act, à la Laurel and Hardy, with Ete very much the straight man. They play off of each other as effortlessly as you would expect between old friends, and the fact that they are having as much fun as the audience during their skits creates a wonderfully genial and down to earth atmosphere.

Island Time is good, clean, family fun, with a relaxed, no-rush vibe (island time if you will) that showcases the brilliant talents of our friends across the ditch. The Laughing Samoans certainly warmed the cockles of Canberra’s collective hearts on this particularly freezing winter’s night, and their next show in the capital will no doubt be eagerly anticipated.