The Wharf Revue – Back to Bite You 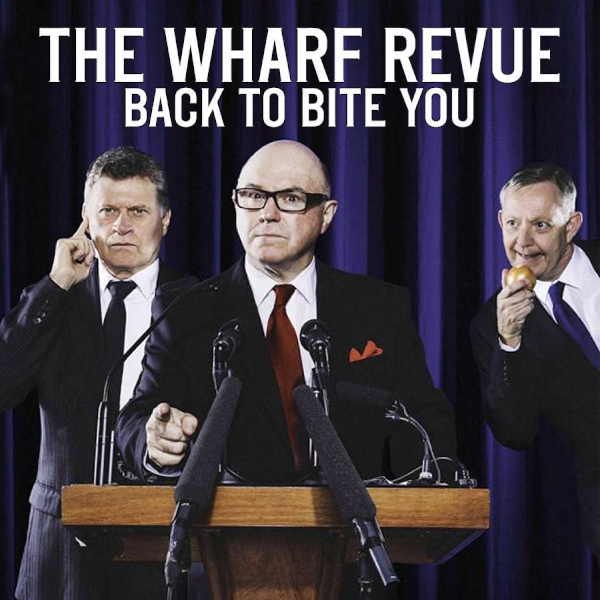 The month of September is highly anticipated in Canberra – it brings with it the thawing out of the ACT after an oppressive winter, enthusiastically celebrated with our festival of many tulips, and also the chance for the political capital to thaw out its sense of humour by the fires lit underneath our pollies in The Wharf Revue.

After last year’s ‘best of’ production, The Wharf Revue crew are back in 2016 with Back to Bite You, featuring brand spanking new material and Katrina Retallick replacing Amanda Bishop as the sole female performer among the gents – namely, Jonathan Biggins, Drew Forsythe and Phillip Scott.

Playing on the language of a plebiscite, the show takes on a highbrow Julius Caesar theme this year (2016 AD), recreating the rise of Malcolm Turnbull (Caesar) as Prime Minister (an event which occurred right on the opening night of last year’s production) amongst the lofty white columns of the Ancient Roman Empire.

This choice of setting has proven an incredibly rich source of inspiration, with more puns and allusions than you can poke a sponge-on-a-stick at. Here you will find such characters as ‘Cordicus Barnardis’ et al plotting the conservatives’ comeback and lobbying against ‘slave-sex marriage’, while Hinchilus the Gladiator and Xenophon the Greek wield their freshly bestowed powers.

Of particular note is the seductive and surprisingly accomplished fan dance by Antonius Abbottus (Biggins) in his red budgie smugglers; revealing a talent that would give any burlesque performer a run for her money.

In terms of debuts, Retallick smashes it in her now trademark roles (Juliana of the Vacillating Virgins, Hillary Clinton) and unleashes an operatic prowess to match her predecessor. The transition is seamless and Retallick really hits the ground running, finding good chemistry with piano virtuoso Phillip Scott.

As audiences have come to expect from every The Wharf Revue production, the content in Back to Bite You predominately remains an exercise in painstaking research and articulation, with the script crafted with the skill of an artisan. Dream Team writers, Biggins, Forsythe and Scott are an intellectual force to be reckoned with, though their witticisms often so deft and unrelenting that one can easily blink and miss them.

Admittedly, there is a point towards the end of the show where the subject matter turns to American politics and things fall a bit flat. While still clever and relevant, these last few offerings just don’t have the same impact as their preceding pieces in Back to Bite You – perhaps it is the reality of the upcoming US election that takes the wind out of the production’s sails for those final moments.

Overall, The Wharf Revue this year is its usual, laugh out loud, harbinger of Spring. Few people know how to do satire better, and it’s always such a treat for this troupe to peddle their wares in our city. The relationship between them and Canberra is a mutually beneficial one, and I’m sure the capital will provide ample fodder for them to come back and entertain us with as the frost melts in 2017.