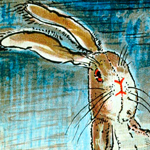 When I mentioned to some people that I was going to see The Velveteen Rabbit, I instantly saw a wave of nostalgia wash over their faces. Based on the 1920s book of the same name by Margery Williams, Free Rain Theatre Company have now bought this story to life for a whole new generation of Canberran children.

The Velveteen Rabbit, for those who are unfamiliar with it, is a story about a handmade toy bunny that is given to a young boy as a Christmas gift. The toy is told that it isn’t real by some other snooty, more technologically advanced toys in the nursery and this leaves it to ponder what this concept of ‘real’ really means. Then one day the wise old skin horse in the nursery lets the rabbit in on the secret that toys become real when their owners truly love them.

The rabbit quickly becomes the boy’s favourite, and they form a deep bond with each other. When the boy falls seriously ill with scarlet fever, the rabbit stays by his side, but when he recovers, all the toys in his nursery need to be burned to prevent the spread of infection. The rabbit cries a tear at this but a magic fairy comes and says that he has earned his stripes– turning him into a real rabbit with a kiss.

The play is narrated by grandfatherly, Rolf Harris look-alike, Jasan Savage who performed the amazing feat of capturing the children’s’ imaginations for the entire half hour with his warm and engaging demeanour.

Playing the boy was Ben Burgess, who didn’t miss a beat in his prominent role. He displayed brilliant timing and presence and exuded enthusiasm without being excessively cutesy.

The Velveteen Rabbit suit was donned by Kiki Skountzos, who was absolutely adorable and managed to get across the fairly profound underlying messages about the joys and heartache of learning to love, and what love can overcome, while maintaining a sense of whimsy and innocence.

The seating arrangements cleverly placed the kids on the floor in a semi-circle right near the stage – closely resembling story time in kindergarten . Amusingly, the nursery set was so inviting that one of the children was overheard asking if they could go over and play with the toys in it.

Most heart-warming however, was when the actors broke out from the stage in costume to chat with the little audience in character after the show, generating plenty of awestruck excitement among the crowd.

This is an old story that has been brought to life in an accessible way, while staying true to the era in which it was written and the underpinning morals that have apparently stood the test of time – making it a day out that both young and old can appreciate.