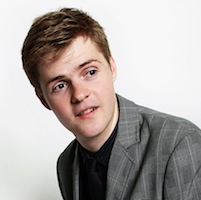 Tom Ballard is a smart young guy.  Funny as too.

A co-presenter on Triple J’s breakfast show, you get the distinct feeling he keeps his true comedic genius under raps by day and savours the freedom his own shows provide by night.

Lucky for us, the Adelaide Fringe provides an opportunity for us to see him in night mode, because it’s highly entertaining.

Ballard’s latest show ‘Doing Stuff’, explores why it is that we are so disengaged with the world’s problems and generally, do nothing about them.  “Doing stuff”, apparently, is simply too hard.

This is a very quick summary, but Ballard masterfully draws his own observations out over the hour with hilarious wit and intelligent political comedy.  He is clearly a well researched and engaged twenty-something, sadly a rare beast these days.

Don’t get me wrong though, if lowbrow puns and smutty humour are your thing, you won’t be disappointed.

In a rare gem, Ballard also sums up his show with finesse; taking a (relatively) more serious tone to describe his own actions to “do stuff” and encouraging his audience do what they can to make a difference.