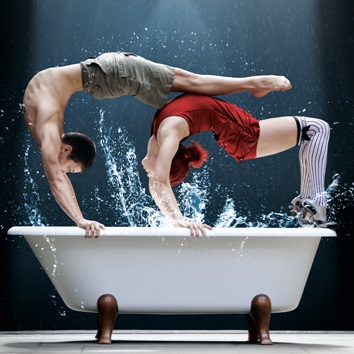 Markus Pabst’s circus genius returns to the Adelaide Fringe via his resurrected 2007 creation SOAP – The Show. Pabst is one of the kings of cabaret variety, having directed La Clique as well as many of his own highly successful shows.

Bringing together a cast of international performers, this acrobatic show is wrapped around the theme of soap - represented here as six bathtubs placed at varying levels on the stage, which become the platforms of their solo and ensemble acrobatics.

The show's real hero however, was female clown Marie-Andrée Lemaire. Her incredibly funny characterisation provided not just laughs, but a much-needed common thread for the show.  Despite this, there was still something missing.  Overall, the performances need tightening up and the show lacked any real narrative or congruency.

If you are planning to see this entertaining show, arrive early and pick your seat carefully. This is a great venue, but there are a number of dead spots on the sides where you will end up with a beam in your line of site, obscuring parts of the action.  If you score a non-bench seat at the front, you'll be more comfortable but expect the odd shower!

When: 21 Feb to 18 Mar. Selected Dates
Where: The Garden of Unearthly Delights - The Vagabond
Bookings: www.adelaidefringe.com.au